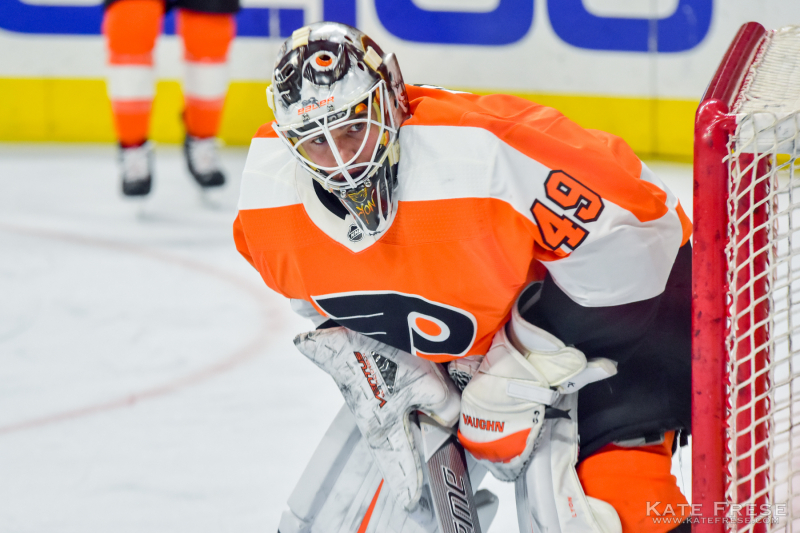 The Flyers agreed to terms and avoided arbitration with a young goaltender, signing Alex Lyon on Saturday to a two-year contract. The deal carries an average annual value of $750,000.

As an NHL rookie last year in his second season as a professional, the 25-year-old netminder went 4-2-1 with a 2.75 GAA and .905 save percentage in 11 games. He earned his first win on Feb. 18 in a 7-4 win against the New York Rangers, after stepping in for an injured Michal Neuvirth.

Though he carried the weight for the Lehigh Valley Phantoms in 2016-17 with a 27-14-5 record in 47 games played, Lyon's role increased rapidly last season — his second as a pro — when Anthony Stolarz went down before the season started with a meniscus injury. Splitting time with Dustin Tokarski, he posted a 16-8-2 record, 2.75 GAA and .913 save percentage at the AHL level.

Lyon also backstopped the Phantoms to the Eastern Conference Final in last year's Calder Cup Playoffs, though they were swept in four games by the eventual champion Toronto Marlies. Most notably, he recorded an astounding 94 saves in a 2-1 five-overtime win against Charlotte — the longest game in AHL history.

Once considered somewhat of an afterthought among the Flyers' heralded goalie pipeline, the undrafted free agent out of Yale figures to start for the Phantoms next season. With Neuvirth and Brian Elliott set to begin the season with the Flyers, Lyon will likely be the first goalie called up in the event of injury.