Flyers Focus on Options from Within for Center, Defensive Depth 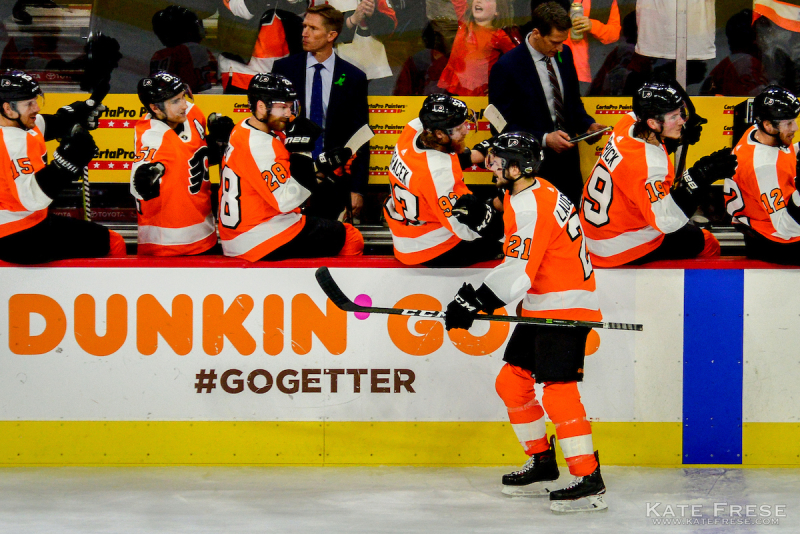 As for their other needs, there just wasn’t anything that made sense to Ron Hextall.

"That guys that we felt were upgrades right now, there was too much term there for us," Hextall said.

"The one thing we don't want to do is box our kids out that we feel are really good players long-term here. The term thing is a big issue for us right now."

So with no short-term options available in the free agent market or through a trade at this time, the Flyers focus shifts to internal options for filling out both the bottom-six forward group and defensive pairings.

At forward, the Flyers top six is pretty well set with JVR now in the picture. The Flyers top line primarily consisted of Claude Giroux, Sean Couturier and Travis Konecny, though Hextall did not rule out Giroux moving back to center.

The second line now has some added scoring ability in JVR alongside Nolan Patrick and Jake Voracek.

The third-line wingers are also pretty well set with Wayne Simmonds and Oskar Lindblom. The third-line center role was one the Flyers were looking into through free agency, but were not comfortable with the term.

So how do the internal options stack up for the Flyers at center? For one, the Flyers have a chance to give Scott Laughton more playing time in a third-line role. The 2012 first-round pick has struggled to really settle into a role, so this could be his chance to step in as an impact player in the middle six.

That would create a hole at center on the fourth line, and this is where the Flyers have several options. Jori Lehtera is still under contract and played in the role last season, for one, but there are other viable options as well.

In the minors, the Flyers had Nicolas Aube-Kubel and Mike Vecchione making noise as potential players ready to make the jump to the NHL. Hextall also went out of his way to mention Jordan Weal by name, even though the team has played him as a winger since he was acquired from Los Angeles.

Weal is one of the players who has flexibility, since he has been used primarily as a winger. The Flyers could easily slot in another player, use Weal on the wing and have Michael Raffl for the remaining fourth-line slot.

Aube-Kubel and Vecchione are the two players in the system that were already mainstays with the Lehigh Valley Phantoms as professional players. There is, of course, the possibility that one of the top prospects from the junior leagues is ready.

This group is naturally headlined by Morgan Frost. Coming off a 112-point season with the Sault Ste. Marie Greyhounds and has gone through development with a leader’s mindset and a skill set that certainly stands out. He’s added roughly 10 pounds to his frame as well, though Hextall noted he needs to get stronger to be NHL ready.

That said, a player like Frost is what comes to mind when you think third-line center. He’s a good two-way player, has the potential to be a producer and if deemed NHL ready, could be the answer.

Mikhail Vorobyev is also part of the discussion. He had a couple of seasons in the KHL under his belt when he opted to come to North America and join the Lehigh Valley Phantoms. At World Juniors two years ago, he led the tournament with 10 assists for Russia. With the Phantoms in his first AHL season, he scored nine goals and had 29 points in 58 games, but the pro experience certainly helps his case.

Another internal option the Flyers have has also been taking part in this week’s development camp. Mark Friedman, the team’s third-round pick in 2014, is also a right-handed defenseman with a physical edge and good mobility. Though he doesn’t compare in size to Myers, he has shown substantial growth from his draft year to become a viable option, and at 22, is one of the more veteran prospects in the system.

Whatever the answer is from within the system remains to be seen, but the Flyers do have a lot of options to fill the internal roles, many of them with young players or budding prospects waiting for the chance.

Getting a proven scorer like van Riemsdyk certainly helps a team’s credibility in trying to contend when having a number of rookies or lack of veteran presence or experience can be viewed as a liability.

There may be more learning curves involved next season with new faces added to the lineup, but bringing prospects to the highest level of hockey serves as motivation as well, and that could give the Flyers even more balance and competitiveness in the wake of a new season.

ok what about goaltending? always an issue in philly cause we always seem to forget about it. Proof is the paragraph right above my comment. We have 3 good solid young goalies. let’s give them a chance and forget the veterans at the end of there careers. never got us a cup anyways