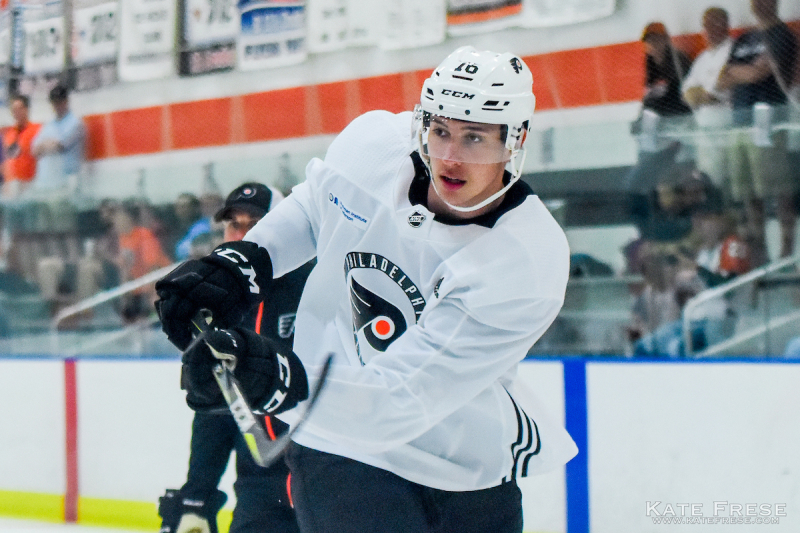 Ron Hextall and the Flyers could have a possible future star in the making with Isaac Ratcliffe.

The Flyers already have so many young star prospects coming through their system, a system that is already near the top of the league, with the likes of Morgan Frost and Carter Hart. They have a bunch of young and talented players already in the NHL. Isaac Ratcliffe could be another player that can help the Flyers in the future, a depth guy who could potentially be on the Flyers sooner rather than later.

Ratcliffe was impressive during the Flyers development camp, showing off his skills. He has a good set of hands and speed for a player of his size — 6'5" and 205 pounds. He also uses his big frame to his advantage, getting physical while not taking it too far.

This is helpful for him when he goes one-on-one with a defender. His big frame and good hands were both on display during development camp, making him a standout and drawing talks of his NHL future.

The Flyers traded up in the 2017 NHL Draft to select Ratcliffe with the 35th overall pick. The move showed that Hextall and the Flyers scouting team saw something in Ratcliffe that warranted such a move.

Ratcliffe has shown that he can put up the numbers in flashes at the junior level. Last season with the Guelph Storm, he tallied 68 points, including 41 goals, in 67 games played to follow up a season with 54 points and 28 goals in 67 games in 2016-17.

Now Ratcliffe has to start working on developing his game for the professional game. For one more season, that will be with Guelph at the junior ranks, where he will serve as the team captain this season. From there, it's off to the pros. Ratcliffe got a brief taste of AHL action last season and scored his first professional goal.

His future outlook with the Flyers says that it will be a couple of years before he enters the conversation for the NHL. He could be a solid middle-six winger if his progression continues and his scoring ability translates to the pros.

Ratcliffe still has a lot of developing to do in order to make the Flyers, but his progression as a player seems to be going strong so far. A strong training camp and another season in the OHL could go far for his game. As his professional career begins following a final junior season, the Flyers could face a difficult question as to where Ratcliffe fits and how ready he is with another season under his belt.

For Ratcliffe, it's a good goal to keep in mind and use as motivation.

View All Posts By Mike Witmer

View All Posts By Mike Witmer

YWT: The Philadelphia Flyers Podcast – YWT #164 – The Fuse Is Lit