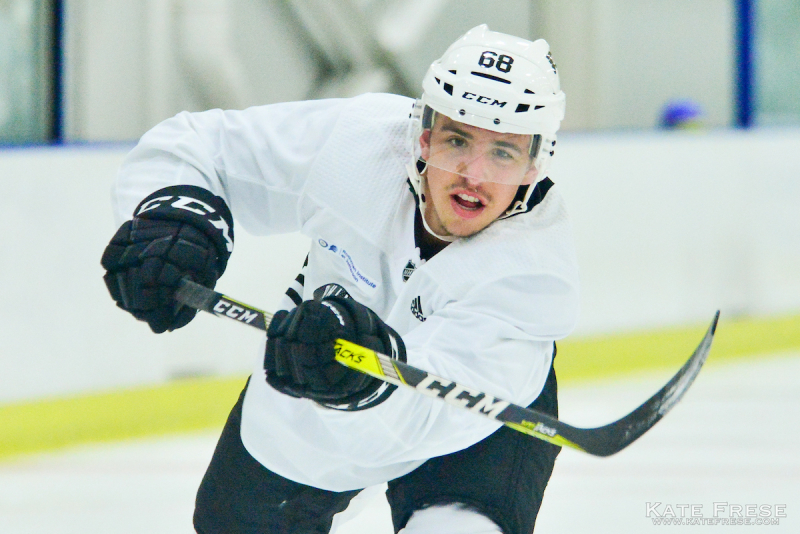 The Philadelphia Flyers finished up development camp earlier this week. While training camp is still a little ways away, there are a couple players that could possibly make the team, or at least deserve a longer look during the camp with the big club. Ron Hextall and Dave Hakstol will be busy trying to find the right fit for these young players.

There are certainly players to look forward to watching from Carter Hart to Morgan Frost. While the likelihood of them making the team this upcoming season may be a long shot, they certainly have a chance.

The future of the Flyers is getting closer and there should be some excitement coming into camp. Here are just a few players that may get an extended look in training camp.

Carter Hart, arguably the Flyers top prospect, will come into camp with the hopes to make an impact. Hart will have to go up against Brian Elliott and Michal Neuvirth to be able to make the NHL roster, which will most likely not happen.

He has an important year coming up next season, graduating to the professional game from juniors. While he played excellent in juniors, putting up a .947 save percentage and a 1.60 GAA in 2017-18, it will be encouraging if he can put up numbers even remotely close to that. Goalies take the longest to develop. So far, Hart has done a great job growing his game. But it still remains to be seen how he adjusts to the professional game in his quest to be a future No. 1 goalie.

Another player who should have a long look during camp is Morgan Frost. While Hextall has said he would still like him to continue to build up more size, Frost has gained roughly 10 pounds to be listed at 184 pounds, one pound lighter than Claude Giroux.

While that could change the more he skates in the offseason, he is starting to put on the weight and grow. He played great in the 2017-18 season, putting up 112 points 42 goals and 70 assists. His chances of making the team are low, but if he stands out in the preseason, he could possibly make it as soon as next season, similar to when Travis Konecny made the team out of camp for the 2016-17 season.

Phil Myers is another player that could make the team on the blue line. He probably has the best odds to make the team among the prospects challenging for spots, and if he's not on the roster out of camp, he's primed for a midseason call-up.

Myers started last season off slowly, coming off injuries in the offseason that followed him to middle of the season. He started to take off once paired with Travis Sanheim, and continued to be a top defenseman with the Phantoms even after Sanheim was called up. The injury to Sam Morin bounces Myers up in the order this season as a player the Flyers can call upon in the event of injury. This offseason should be a better one for him as a healthy offseason can go far for him.

A fourth player to watch for is German Rubtsov. The first-round selection in 2016 is eligible to play for the Phantoms next season. While last season was filled with injuries and rather disappointing offensive numbers -- 12 goals and 32 points -- the belief is that he has worked on polishing his defensive game during his time in the QMJHL.

His goal now is to start bringing some offense to his game, and the hope is that he can have better success with the Phantoms.

We will have to see how Hextall and Hakstol decide during training camp and what is the best way to get this team to compete and if some of these young prospects are ready for the call-up to the NHL.