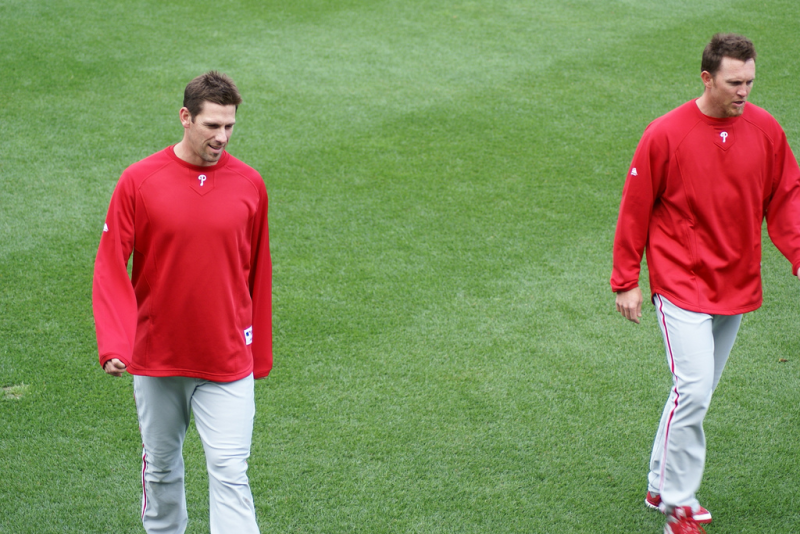 Although nearly dealt for each other following the 2007 season, Cliff Lee and Brad Lidge eventually became teammates with the Philadelphia Phillies in 2009 and 2011 (Steve Trapani/Flickr).

With the 2018 season marking 10 years since the Philadelphia Phillies captured their second World Series championship in franchise history, reflections of the historic run continue to be made among players, executives, coaches and alike connected to the then-Charlie Manuel-led club.

Sunday evening marked the debut of NBC Sports Philadelphia's documentary of the season, “World Champions: The Story of the '08 Phillies," which surfaced some of those reflections. One interesting tidbit shared by former Phillies and Houston Astros general manager Ed Wade was in regard to his Nov. 2007 trade of closer Brad Lidge and utility player Eric Bruntlett to the Phillies.

In the trade, the Phillies and Pat Gillick sent Michael Bourn, Mike Costanzo and Geoff Geary to the Astros. But such package nearly was not enough. Lidge drew interest from two teams at the time of the trade — the Phillies and the Cleveland Indians. Per Wade, the Astros nearly instead opted to send Lidge to the reigning American League Central division champions in a package highlighted by then-six-year veteran southpaw Cliff Lee.

At the time, Lee was 54-36 with a 4.64 ERA in 129 career appearances. The Benton, Arkansas, native was coming off a career-worst 6.29 ERA. Wade simply saw more intrigue in a speedy Bourn, a respectable bullpen arm in Geary, and a up-and-coming slugging first baseman prospect in Costanzo.

It is safe to say Wade was wrong, and thankfully so. In 2008, Lee would go on to earn his first-career All-Star nod — as well as become the American League Cy Young Award winner — behind a 22-3, 2.54 ERA season.

"People think I did [the trade] because of my Philly background, and [that] can be nothing but further from the truth," said Wade, who was just a couple of months into his new position with the Astros at the time of the trade.

"There were two clubs that were interested in Brad Lidge at that point in time ... obviously, Philadelphia, and the other club had a big-league pitcher who had really struggled the previous year and spent time at Triple-A. And that club had interest in him as well. If we had made the trade with that club, the Astros would have acquired Cliff Lee from Cleveland, which means Philadelphia may have ever gotten Cliff Lee, and they would not have ever gotten Brad Lidge."

Lidge was a critical part of the Phillies' success in 2008 — given his perfect season in save opportunities. It would be hard to imagine the Phillies finishing at the top of the baseball world had the trade not occurred. Bourn would have probably remained on the major league roster, taking away at-bats from Shane Victorino, Jayson Werth and Pat Burrell in the process.

In addition to altering the course of the 2008 season, the Astros acquiring Lee would have changed series of events regarding the Phillies' eventual acquisition of Roy Halladay and the formation of the franchise-best, 102-win Phillies three seasons later in 2011.

What could have been.

Lidge and the rest of the 2008 Phillies will be honored during Toyota Phillies Alumni Day on Sunday, August 5, prior to the game against the Miami Marlins at Citizens Bank Park.