Eagles Flyers Phillies Sixers About Us Write For Us
Previous month:
June 2018
Next month:
August 2018

Despite being not too far removed from a postseason spot with 57 games left to play, it appears the Washington Nationals have officially placed six-time All-Star and 2015 National League Most Valuable Player — outfielder Bryce Harper — on the trading block.

The Nationals are reportedly letting teams know that Harper is "indeed available," with approximately 17 hours remaining until Tuesday's 4 p.m. trade deadline, according to MLB.com's Mark Feinsand. The Cleveland Indians have recently contacted the Nationals regarding a "possible trade," per MLB.com's Jon Paul Morosi.

Like Manny Machado, Harper is set to rental free agency and would be acquired on a rental status. Harper is on a one-year, $21.63 million expiring contract, and is still owed approximately $7.3 million for the remainder of the season, per YES Network's Lou DiPietro.

Sources told me last week that among the teams that asked the #Nationals about Bryce Harper besides #Dodgers were #Indians, #Yankees and #As
I imagine the most recent news adds a few other teams like #Phillies #Astros maybe even #Rockies to that list.

#Nationals are at least willing to see if get blown away with Harper offer as @Feinsand 1st reported. Execs I talked to put trade at low possibility, but fact even a discussion 2 weeks after Harper won HR Derby in home park thrilling faithful speaks to current state of Nats

The Phillies have been long-speculated to be contenders to sign Harper upon free agency in the offseason. No one expected the Nationals, who have won three of the last four National League East titles, to be sellers by the July 2018 deadline, however. Whether the Nationals consider trading the seven-year veteran to their division-rival Phillies remains to be seen. 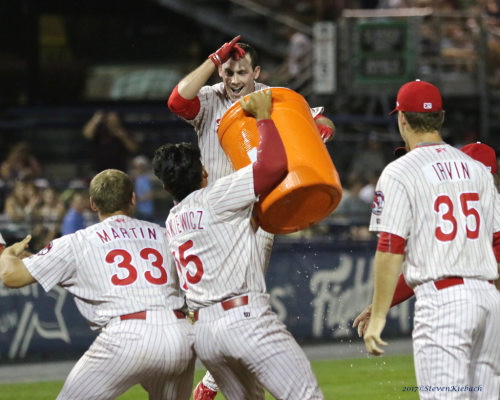 “I’m very excited. It was a very humbling experience retiring from baseball, and talking with coaches and having them have an interest in me to come and try to help their football program win games was very cool," Sandberg told Inside The Auburn Tigers.

Sandberg, 23, was drafted in the third round of the 2013 amateur draft out of Manatee High School. A former high school quarterback, Sandberg forwent a scholarship to play at Mississippi State, despite logging 79 touchdowns and just eight interceptions spanning 627 passing attempts.

The Bradenton, Florida, native will now get the opportunity to play collegiate football after all.

For the first time since joining the Los Angeles Lakers, LeBron James sat down to talk about his decision with ESPN's Rachel Nichols. Leading up to James' decision, there seemed to be a chance that he'd come to Philadelphia and his representatives met with the Sixers prior to agreeing to sign with the Lakers.

During his sit down with ESPN, James was asked why he chose the Lakers over a team closer to winning a championship. The first two players out of his mouth while answering? Joel Embiid and Ben Simmons.

Even after acquiring Asdrubal Cabrera, the Philadelphia Phillies may be looking at another New York Mets position player to bolster their bench — six-time All-Star and three-time Silver Slugger Award winner, Jose Bautista.

The Phillies are one of the teams to "check in" on Bautista, however the Mets will not trade him "for nothing," according to Fancred's Jon Heyman.

If Bautista was dealt to the Phillies, it would be his third National League East club this season, having played 12 games for the Atlanta Braves and 58 for the Mets so far. The Santo Domingo, Dominican Republic, native played 10 seasons with the Blue Jays from 2008-2017, and logged six home runs and 16 RBI in 20 postseason appearances from 2015-2016.

Report: Phillies "a possibility" for Giants OF Andrew McCutchen

With the San Francisco Giants reeling as of late, dropping seven of their last 10 games, the team could very well be positioned to be sellers at Tuesday afternoon's Trade Deadline.

According to MLB Network's Jon Paul Morosi, Giants OF Andrew McCutchen has been the subject of recent trade rumors as of early Monday morning, with connecting teams in both the Indians and Phillies, who both missed out on Adam Jones, who decided he was going to stay in Baltimore.

While the Philadelphia Phillies bullpen has posted a MLB-best 2.63 ERA in the month of July, their rotation has posted a 4.00 ERA, the fifth-worst among the 10 current postseason-qualifying teams.

Despite general manager Matt Klentak being on the record of saying the Phillies are "very encouraged" about their current rotation, and are "hopeful" to "stay out of the starting pitcher trade market." It appears the Phillies brass is having second thoughts, however, as since last Monday's home series opener against the Los Angeles Dodgers, the club's starters have a sixth-worst 5.91 ERA.

According to Fancred's Jon Heyman, the Phillies, Atlanta Braves, Milwaukee Brewers and New York Yankees have "shown the most interest" in New York Mets RHP Zack Wheeler. No team, however, has met the Mets' asking price for the four-year veteran, who "may well stay in Queens."

Philadelphia Phillies 16th-ranked prospect OF Dylan Cozens has been named the International League Batter of the Week, his second-career honor, according to MiLB.com's Chris Dunham Jr.

The lefty reached base safely multiple times in each contest during the Pigs' six-game homestand and finished the week 10-for-21 (.476) while leading the league with four home runs, four doubles, 13 RBI, six runs, 26 total bases and a 1.238 slugging percentage. He also walked five times.

He opened the homestand with a three-run game-tying home run Tuesday against Gwinnett, repeated the feat in Thursday's contest and added a pair of two-run shots in Saturday's victory over Columbus in the second leg of a doubleheader.

Since rejoining the IronPigs on July 12 — after collecting just two hits in 21 plate appearances with the Phillies from June 1-July 9 — Cozens is slashing .317/.419/.825 with eight doubles, eight home runs, 22 RBI, 11 walks and 23 strikeouts spanning 17 games and 74 plate appearances.

Cozens is tied with two other players — teammate Mitch Walding being one of them — for the International League lead in home runs this season, 18.

The Philadelphia Phillies had been looking at infielders to improve their team over the past few weeks, but haven't found a long-term solution. The Phils added veteran infielder Asdrubal Cabrera last week, but he isn't a great defensive shortstop. Scott Kingery is hit-or-miss defensively at short since his natural position is second base.

Some good news is that the Phillies could get some help on the defensive side of things at shortstop soon as J.P. Crawford begins his road back from a broken hand suffered back on June 19.

J.P. Crawford begins a rehab assignment today with the Gulf Coast League Phillies East. He’s been in Clearwater since Thursday. Could rejoin Phillies in first few weeks of August.

Crawford, once highly-regarded as the best prospect in the Phillies organization, has yet to settle in comfortably at the big league level. In 34 games this season for the Phils, Crawford is slashing .194/.312/.333 with five doubles, a triple, two homers, eight RBI, 14 runs scored, 33 strikeouts and 12 walks. While many Phillies fans are ready to close the door already on the 23-year-old, he's only had 199 plate appearances in the majors and should have more of an opportunity to turn that around.

The Phillies drafted Crawford with the 16th pick in the 2013 MLB June Amateur Draft out of Lakewood High School in California.

Having lost three games in a row for the first time since June 24-26, the Philadelphia Phillies (58-47) and All-Star RHP Aaron Nola will oppose the MLB-best Boston Red Sox (74-33) and 11-year veteran southpaw David Price in the first of a two-game set at the historic Fenway Park.

Sox beat the the O's 9-0 in 5 innings. Devern Hansack got the win. Kapler had a three-run double.

Now Cora vs. Kapler as managers.

Roman Quinn will make his fourth career start at right field, and his first MLB start overall since Sept. 2016, while Asdrubal Cabrera will start as the designated hitter and bat fifth in the lineup. The Phillies series opening lineup features four switch-hitters: Quinn, Cabrera, Cesar Hernandez and Carlos Santana.

The Phillies have lost five straight games at Fenway Park dating back to Sept. 2015, and have fallen in eight of their last 10 contests against the Red Sox overall since April 2015, outscored 55-27.

It's been just over seven weeks the the Philadelphia 76ers decided to part ways with Bryan Colangelo. An investigation revealed that Colangelo's wife was operating secret Twitter accounts that dispersed team intel and also insulted players and former front office executives. While the organization continues to search for a new general manager, head coach Brett Brown has been heading up basketball operations at the moment.