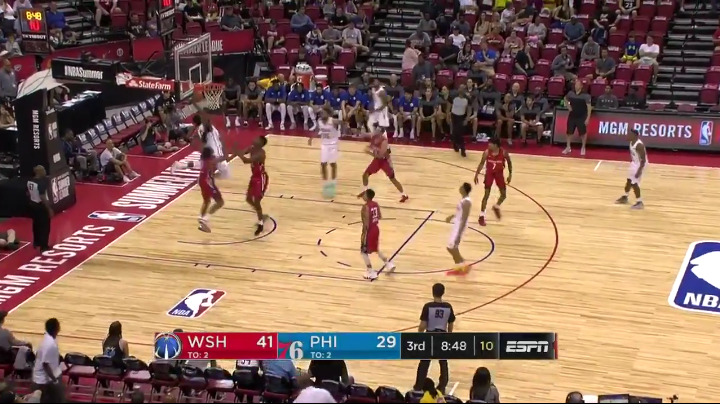 The Sixers were back in action after having a day off at the MGM Resorts Summer League in Las Vegas and it looked like they overslept after getting dominated by the Washington Wizards Summer League team on Monday evening.

The Wizards opened a quick 10-2 lead over the Sixers before Norvel Pelle entered off of the bench and scored five straight points to trim the Washington lead.

Pelle and Chris McCullough would lead the Sixers with five points a piece in the first quarter.

The Sixers managed to hang within striking distance of the Wizards with a late push that was capped by a Devyn Marble three-pointer in transition.

The Sixers forced a turnover to regain possession, but Askia Booker tried to beat his man off of the dribble and accidentally ran out the shot clock without ever making a pass during the 24-second countdown.

The Wizards carried a 22-17 lead into the second quarter.

The Sixers only made five field goals in the first quarter and somehow managed to score even less points in the second quarter, as they trailed 41-27 at halftime.

Troy Brown Jr. and Devin Robinson led all scorers with 12 and 10 points respectively. The Sixers shot 21.2 percent from the field as a team in the first half. Zhaire Smith and Furkan Korkmaz were a combined 0-for-13 with one point in the half.

The Sixers showed signs of life in the third quarter after Cameron Oliver opened the half with two thunderous dunks, the second of which came off of an alley-oop from Zhaire Smith. Smith found Oliver in transition for an and-one moments later as the pair displayed some nice chemistry.

After the early in-roads made by Oliver the Wizards tightened up again, cutting any Sixers run short. Chris McCullough led the charge for the Sixers on both ends of the floor notching multiple blocks to go with eight points and three rebounds to keep the Sixers afloat.

The Wizards would take a 65-55 lead into the final quarter.

Despite McCullough's best effort the Wizards ran away in the fourth quarter.

The Wizards secured a dominant 87-75 victory over the Sixers.

Chris McCullough led the Sixers with 20 points to go along with eight rebounds. Devyn Marble and Jonah Bolden were the only other Sixers in double figures with 10 points each.

Troy Brown Jr., the man taken one spot ahead of Zhaire Smith, led all scorers with 23 points. Devin Robinson added 22 points and Thomas Bryant posted a double-double with 16 points and 12 rebounds.

The superstar of the Sixers first Summer League game Furkan Korkmaz continued to struggle only scoring one point and has five points over his last two games since dropping 40 in the opener.

Zhaire Smith struggled as well, only making one field goal on nine attempts. McCullough was the major standout in this game for the Sixers, but Norvel Pelle continued a strong summer as he auditions to join the Blue Coats after playing for the Delaware 87ers from 2013 to 2015. Pelle scored nine points on 75 percent shooting along with three rebounds in 14 minutes.

Cameron Oliver also made a claim to Blue Coats general manager Elton Brand with a number of stand out dunks that nearly shifted the momentum in the Sixers favor. Oliver had nine points and six rebounds in 18 minutes.

This game marked the end of the preliminary schedule for Summer League, and now the tournament to crown a summer league champion will begin.