Maksim Sushko Could Be 4th-Round Find for Flyers 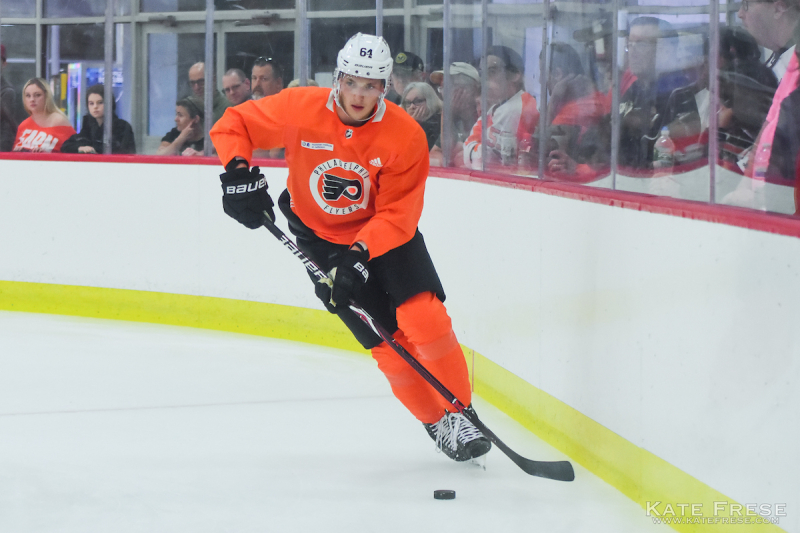 The Flyers have many young and talented prospects in their system from Morgan Frost to Phil Myers. GM Ron Hextall has certainly drafted well in his time at the helm.

With so many talented prospects in the system, the Flyers not only have to focus on adding potential stars from their prospect pool, but depth players who could play important roles on the team.

Maksim Sushko could be one of those players.

The Flyers selected Sushko in fourth round with the 107th overall pick in 2017. The right-winger from Belarus still has a couple years before he is going to be consider for the NHL, but has shown promise during his time in juniors.

Last season, with the Owen Sound Attack in the OHL, Sushko had 60 points, including 31 goals, in 60 games players, nearly doubling his point total from the previous season -- 32 points in 54 games.

It will still take some time before we know if Sushko has a future in the NHL or not. He still has a couple of seasons ahead to build up his game and improve. His game has improved each season and that could put him on the radar for a bottom-six role in a few seasons.

If he can put up another season with an increased point production like last season, then it will go far for his development and give him even more of a case to be a potential NHL player for the Flyers.

For this upcoming season, Sushko will likely get a short look at training camp before going back down to juniors with Owen Sound. However, he could be someone we see sooner rather than later.

If Sushko were to make it on the Flyers or to the NHL elsewhere at some point, he would be just the 13th player from Belarus to ever play in the NHL. Of the 13, only six have played more than 100 NHL games -- Mikhail Grabovski, Ruslan Salei, Vladimir Tsyolakov, Konstantin Koltsov, Andrei Kostitsyn and Sergei Kostitsyn. There have been no active Belarussian players in the NHL since the 2015-16 season.

The Flyers have been able to get mid-round picks to the NHL in recent seasons -- Shayne Gostisbehere was a third-round pick in 2012, Oskar Lindblom was a fifth-round pick in 2015. Perhaps Sushko is the next to join that group, to rise through the ranks as a prospect and reach the top level in the NHL.