Eagles Flyers Phillies Sixers About Us Write For Us
Previous month:
July 2018
Next month:
September 2018

The Flyers have announced the local television broadcast schedule for the 2018-19 season.

The Flyers will be regularly broadcast on NBC Sports Philadelphia throughout the season, starting with the regular season opener on Oct. 4 against the Vegas Golden Knights at 10 p.m.

In total, the Flyers will have 62 of their 82 games televised on NBCSP and eight more broadcast on NBCSP+. Five of the Flyers 13 nationally-televised games on NBCSN will be available locally on NBCSP, the first being the team’s home opener on Oct. 9 against the San Jose Sharks at 7 p.m. 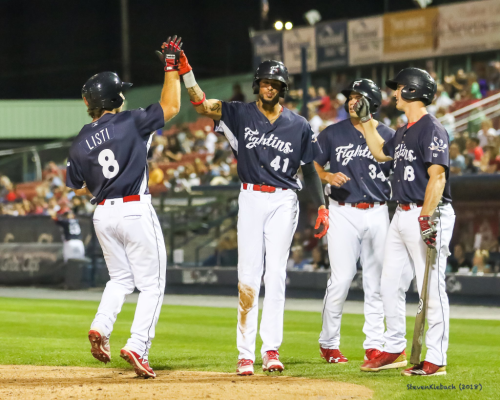 Barely just one day since joining the Philadelphia Phillies following a trade with the New York Mets, 15-year veteran and six-time All-Star outfielder Jose Bautista will make his club starting debut — batting sixth as the right fielder — in the series finale against southpaw Gio Gonzalez and the Washington Nationals Wednesday evening at Citizens Bank Park.

The Phillies acquired Bautista, 37 — for a player to be named later or cash considerations — in another attempt to bolster the club's bench for a postseason run. Baustita is the club's firth such veteran acquisition over the past few weeks, joining Asdrubal Cabrera, Justin Bour and Wilson Ramos.

While the Philadelphia Phillies have fallen further from postseason contention — losing eight of their last 10 contests and winless in seven straight series — the 2018 club's ultimate fate really will not be decided until their final 11 games, seven of which will be played against the National League East-leading Atlanta Braves.

Every aspect of those seven games will be critical for the Phillies as they look to inch closer and make up lost ground. Recognizing the high stakes of the stretch, FOX Sports has flexed the club's originally-scheduled Saturday, Sept. 22, game at SunTrust Park from 7:10 p.m., to a nationally-televised 1:05 p.m. game, according to The Athletic's Nubyjas Wilborn.

In addition to their Sept. 22 game against the Phillies, FOX Sports has also flexed the Braves' Saturday, Sept. 15 game against the Washington Nationals to a 1:05 p.m., nationally-televised start.

Flailing Phillies Turn to Arrieta in Series Finale Against Nationals

Turning to RHP Jake Arrieta with hopes of salvaging the series finale, the Philadelphia Phillies (70-62) will take on 11-year veteran southpaw Gio Gonzalez and the Washington Nationals (67-66) for the fourth-to-last time of the season Wednesday evening at Citizens Bank Park.

Another heartbreaking loss occurred Tuesday evening against the Nationals. Right-hander Aaron Nola was in-line to defeat Max Scherzer for the second straight start — and win his 16th game — but fielding misplays and the bullpen's two-run, ninth-inning home run surrendered to Anthony Rendon quickly erased such aspirations. Wilson Ramos laced a RBI double to pull the club within one in the bottom half, but pinch runner Vince Velasquez's baserunning blunder — trying to advance on a fly out — resulted in the final out of the contest. The Phillies had won all of Nola's previous 12 home starts prior this season.

The Phillies have been swept just twice under Gabe Kapler in 2018, although they have fallen in four straight series and are winless in each of their last seven series since August 6-8 against the Arizona Diamondbacks. The Phillies have lost eight of their last 10 games and four straight home games, both dating back to Saturday, August 18. The club has 30 games remaining this season, 23 against National League East opponents and 16 at home. Seven of the Phillies' final 11 games will be against the Atlanta Braves, who currently lead the division by 4 1/2 games.

PHILADELPHIA, Pa. — Tonight's game between the Washington Nationals (67-66) and the Philadelphia Phillies (70-62) was a rematch between staff aces and National League Cy Young award candidates Max Scherzer of the Nationals and Aaron Nola of the Phillies. The pair faced off last Thursday in Washington, with Nola and the Phillies coming out on top. For much of tonight's game, it looked like the outcome would be the same. However, due to some key errors late in the game and a bad ninth inning by the Phillies bullpen, the Nationals came out on top.

Nola was once again excellent for the Phillies. Over seven innings, the righty allowed two runs, one earned, on four hits. He walked two batters and struck out eight. Nola looked very much in command of all his pitches and of the game itself. Though Tommy Hunter was quite good in the eighth and finally looked like he would be the stable veteran presence in the 'pen that the Phillies were looking for when they signed him this past offseason, the batter he walked to lead off the ninth inning ended up tying the game. Pat Neshek struggled the most in the ninth. He allowed a critical two-run homer, in addition to another baserunner that later ended up scoring. Hector Neris got the final two outs of the inning, although Neshek's second runner did score on an error while Neris was on the mound. The Phillies now have a whopping 102 errors on the season, which ties them with the St. Louis Cardinals for the most in baseball.

There were some bright spots on the offensive front. Odubel Herrera once again homered off of Scherzer. Herrera now has 14 hits against the reigning NL Cy Young winner, and his two homers this month are both against the Nats' ace. Jorge Alfaro also homered in the ballgame. Scott Kingery picked up two hits and scored a run. Nick Williams and Wilson Ramos both doubled.

The Philadelphia Eagles will begin their season without their top wide receiver. Adam Schefter of ESPN reported earlier today that Alshon Jeffery will miss at least the first two games against the Falcons and Buccaneers.

Eagles WR Alshon Jeffery is expected to miss at least the first two games of the season, but the team will activate him to the 53-man roster this weekend with optimism he could be back by week 3, per @mortreport and me.

Jeffery will take a spot on the 53-man roster to start the season rather that being placed on the Physically Unable to Perform (PUP) list. The reason that the Eagles will not place Jeffery on the PUP list is that they are hopeful that he will be ready to play in the Week Three matchup against the Indianapolis Colts. If the team were to place him on the PUP list, he would be ineligible to play until Week Seven.

Jeffery racked up 1,008 yards and 12 touchdowns through the 2017 season, averaging 14.6 yards per catch. He did this all with a torn rotator cuff that he suffered during last preseason. A side effect to winning a Super Bowl is a short offseason. With a longer offseason, Jeffery could have had surgery earlier and might well have been ready for Week One. I am by no means saying that a longer offseason would have been better, but rather that this is one of the reasons that repeating as world champions is so difficult.

In order to do just that this season, the Eagles will need Mike Wallace, Nelson Agholor, Mack Hollins and Shelton Gibson to step up and fill the gap Jeffery will leave for at least the first two games of the season. The Eagles may even choose to keep DeAndre Carter on the 53-man roster, if only for the first week of the season as the Eagles will have an extra roster spot while Nigel Bradham serves his suspension and sits out the first game of the season.

How Close are the Flyers to Being Contenders?

The slow and steady build of the Flyers under GM Ron Hextall is starting to show progress, at least on paper in the roster makeup.

Depending on how training camp progresses and the roster truly shakes out, the Flyers will have a dangerous combination of veterans -- Claude Giroux, Jake Voracek, Wayne Simmonds, Sean Couturier, James van Riemsdyk -- and young, up-and-coming stars -- Travis Konecny, Nolan Patrick, Oskar Lindblom. That right there is nine forwards, creating a formidable top nine.

On the blue line, Ivan Provorov is already a defined No. 1 defenseman at age 21. Shayne Gostisbehere is regarded as one of the best offensive defensemen in the game. Travis Sanheim and Robert Hagg managed to get their feet wet in the NHL last season. Phil Myers is not far behind.

Similar to Myers, goalie Carter Hart is about to begin his professional career, putting him one step away from the NHL as well.

Hextall’s goal from the day he took over as GM has been to build the Flyers into a Stanley Cup contender. With the roster where it is now, how close are the Flyers to being a true contender?

Continue reading "How Close are the Flyers to Being Contenders?" »

Phillies Option Knapp to make room for Bautista on 25-man

Just hours after officialy acquiring outfielder Jose Bautista from the Mets, the Phillies have optioned catcher Andrew Knapp to the Lehigh Valley IronPigs.

To make room on the 25-man roster, Andrew Knapp has been optioned to Lehigh Valley (AAA). pic.twitter.com/WhVHUTTM5L

The move makes it so that Jose Bautista is eligible to play with the club during tonight’s game against the Washington Nationals. In 23 at-bats versus tonight’s opposing starter Max Scherzer, Bautista is slashing .478/.538/.913 with two homeruns, three walks, and three strikeouts.

There are only four more days until the September 1st game in which rosters expand and any player still on the 40-man is eligible to play for the Major League club. Knapp will most likely be with the team following that as another bench bat to use for the final month of the season.

Paul Holmgren Happy to Have JVR Back with Flyers

In the offseason following the 2011-12 season, the last time the Flyers won a playoff series, then GM Paul Holmgren pulled the trigger on a move that is widely regarded as one of the worst in franchise history.

Six years later, van Riemsdyk is back in the Orange and Black after signing as a free agent, the trade long behind him. For Holmgren, it’s a deal that will follow him forever. He’s well aware or where the trade ranks in franchise history.

Continue reading "Paul Holmgren Happy to Have JVR Back with Flyers" »