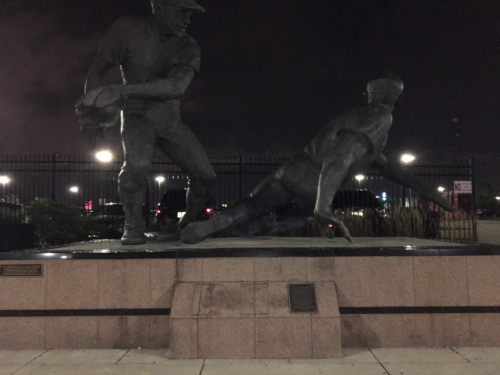 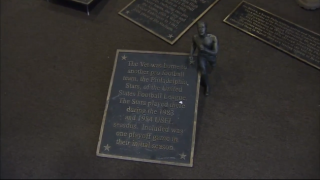 Who dumped the plaques at F and J Recycling and when "remains a mystery," per Bloomquist.

F and J Recycling owner Jim DiBartolo said one of his scrappers said to "keep an eye out," prompting his search and subsequent recovery of the stolen plaques in "the hole." "I don't even know how long they've been sitting back there," DiBartolo said.

Scrappers bring in their load and after it's weighed it all goes in the hole and they get a price per pound. ... DiBartolo speculates the thief put the plaques in with a larger load, knowing the police would be looking for them. ... He said whoever dumped them got pennies for them. ... DiBartolo said his security cameras probably wouldn't help. Dozens of scrappers come in all day dumping truckloads of metal and it's amazing they found these.

DiBartolo called recovering the plaques one of F and J Recycling's "biggest finds," and that he "just wants them returned to the statues they seem to have come from." "I'll be grateful if they're back where they belong," he said.

The Phillies were first made aware of the missing plaques during Alumni Weekend and their four-game home series against the Miami Marlins. Investigators sifted through a week-long surveillance video, but found no leads until DiBartolo's call to Action News and the Philadelphia Police Department on Thursday.

The stolen plaques have an estimated $7,500 overall value, or $1,500 per plaque. The Phillies have yet to comment on the incident.