Eagles Flyers Phillies Sixers About Us Write For Us
Former Phillies OF Jayson Werth: Baseball Is a ‘Beautiful Game,’ 'Getting Screwed Up’ With Analytics
Phillies' Hoskins Among 10 Ambassadors for 2nd Players' Weekend 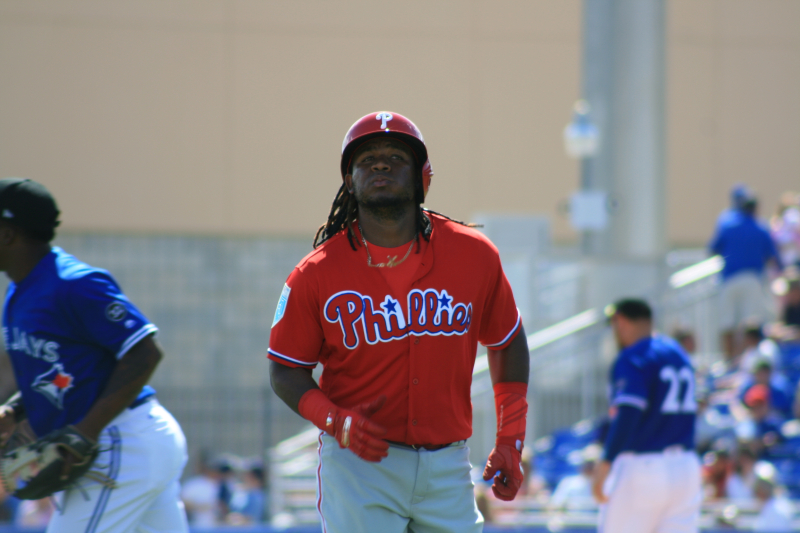 For months before the start of the 2018 season, rumors had circulated Philadelphia, as well as numerous other cities, about the possibility of Manny Machado playing third base for their respective team in the near future. More than a month ago as the trade deadline approached, the Phillies floated closer and closer towards a deal with the Baltimore Orioles for the All-Star at shortstop, as he announced at the beginning of the season that he was focused on playing up the middle at this point in his career.

As baseball fans now know, it was reported that the Phillies had a deal in place to acquire Machado, however he was ultimately dealt to the Los Angeles Dodgers before the trade deadline, placing him with the likes of Frank Gore as the most popular Philadelphia athletes that almost donned a jersey. Luckily, Machado could still be a Phillie thanks to free agency this upcoming offseason.

However, the conversation around the player that it was once believed Machado would replace, Maikel Franco, has not disappeared, but completely turned inside out. Franco put together arguably the best single month of his major league career in the July, batting .330 with 7 home run's and 15 RBI's, jumping his batting average from .258 to .278 by the end of the month.

During Franco's first extended time with the club back in 2015 after being a September call up the year prior, he hit .280 with 14 home run's and 50 RBI's in 80 games. The franchise and city anxiously anticipated similar, if not better, numbers from Franco for an entire season for the next two years. Unfortunately, Franco neglected to hit above .260 in either of the two years while hitting 24 and 25 home run's between the two years.

It is possible that Franco is the type of player that will average those types of numbers during a season for the rest of his career, but with such a young player, there is still the possibility of watching him grow into something bigger, as to what his initial big league prowess appeared to have alluded to. Couple that with a month such as this past July where he played like an All-Star and potential MVP candidate, and there appears to be a bigger, stronger Franco hidden inside that the Phillies have yet to see be unleashed.

Franco has spent the entire 2018 season jumping around the lineup card as Manager Gabe Kapler continues to juggle where to place him game after game. Primarily, he's spent time batting fifth through seventh on the card, with majority of his success, believe it or not, coming as far back in the lineup as possible.

He's played the most game batting sixth (30 games) while hitting .291 with 6 home run's and 24 RBI's. Although with only 13 games batting eighth, Franco is hitting .394/.487/.636, providing the Phillies with a more than capable threat to keep pressure on the opposing pitcher even at the bottom of the line up.

The Philadelphia Phillies still may very well sign Machado this upcoming offseason, as the team has a lucrative amount of money to throw at multiple potential free agents and has said publicly is not afraid to spend it. And while such a signing would place the organization in quite a situation with Cesar Hernandez and rookie Scott Kingery, the combination of a lineup that potentially reads the names Rhys Hoskins, Franco, Carlos Santana, and Machado is much to be anticipated.