Eagles Flyers Phillies Sixers Union About Us Write For Us
Sixers, NBA release full schedule for 2018-19 season
Jamal Crawford: 'I would be honored to play for Sixers' 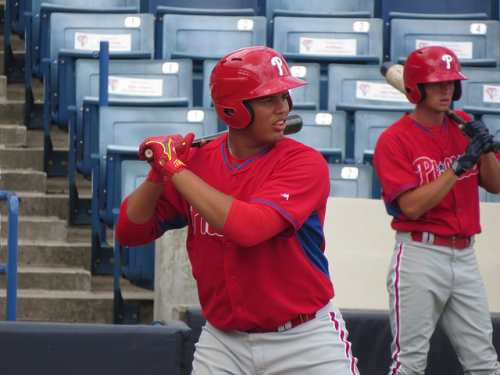 Two Dominican Republic natives within the Phillies' system with the last names of Ortiz and Pujols are showing considerable power potential. Their first names are not David and Albert — who combined for 20 All-Star appearances and five World Series championships in their careers — but rather Jhailyn and Jose.

While the Philadelphia Phillies have three slugging everyday outfielders in Rhys Hoskins (22 home runs), Odubel Herrera (19) and Nick Williams (16), minor-league right fielders Jhailyn Ortiz and Jose Pujols are not too far away from the majors themselves. This season, both have combined for 31 home runs and 108 RBI spanning 775 plate appearances and 190 games.

Ortiz, 19, is the Phillies' No. 7-ranked prospect by MLBPipeline.com. In February, Phillies World Series-winning manager Charlie Manuel said Ortiz has "the chance to be a real good hitter."

"[Jhailyn's] doing good. He's got the chance to be a real good hitter. He has what I call a 'strong back side.' He stays behind the ball good and has quick hands. When he hits the ball, it looks like it doesn't want to come down. It looks like it keeps jumping ... he's young. He's 19 right now, but at the same time, he's definitely ahead of like a high school kid coming out or maybe a first-year college player. He's already ahead of those guys because he's played the last couple years. He's got talent and has the chance to be a real good hitter."

The Jarabacoa, Dominican Republic, native was hitless in 29 straight plate appearances from July 30 to August 7, but has since slashed .500/.571/.500 over his last seven plate appearances with one run scored, three singles, one RBI, one walk and one strikeout.

While not ranked as a Phillies top-30 prospect, NBC Sports Philadelphia's Jim Salisbury notes that the Santo Domingo, Dominican Republic may need to be protected this offseason for the Phillies to avoid losing him in the December Rule 5 draft.

The Phillies gave Pujols a $540,000 signing bonus in the summer of 2012. That kind of money buys a player a little more time and Pujols has capitalized. The 22-year-old rightfielder from the Dominican Republic has shown signs of maturing as a person and a hitter and put himself back on track with one of the best offensive seasons in the organization. He was leading the Florida State League in hitting (.301) and OPS (.887) and was third in homers (18) and RBIs (58) when he was promoted to Double A Reading last week. He took right to the new level with eight hits, including two homers (one was a grand slam), in his first 18 at-bats.

Pujols is 6-5, 205 pounds. He has a plus arm in right field and power to all fields. At his age, with his tools and the numbers he is putting up this season, it is difficult to imagine the Phillies not protecting him on the 40-man roster this winter and buying some more time to see just what they have. Right now, it looks pretty good.

It will be interesting to see if, when and how Ortiz and Pujols develop further as power hitters, and, if so, when they ultimately make their big-league debuts in Phillies red pinstripes.