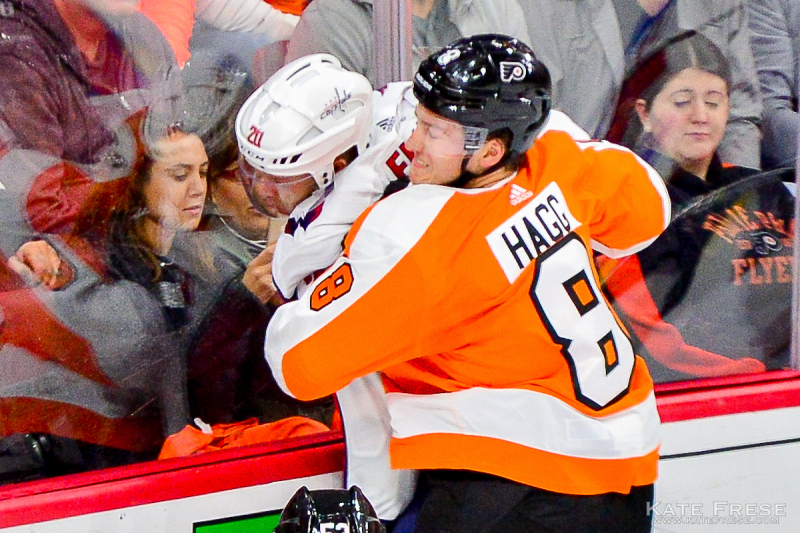 The Flyers re-signed restricted free agent Robert Hagg on Wednesday and slowly the patience GM Ron Hextall has shown with his youth on defense is starting to pay off.

Hagg signed a two-year, $2.3 million deal, a good bridge deal for someone who showed some promise last season.

Hagg is just one of the many defensemen who started in the Flyers system as a draft pick that has worked his way to the NHL and the Flyers present. As the team prepares for the 2018-19 season, the Flyers future on the blue line has started to become the present.

For most of last season, Hagg led the league in hits and regularly played a steady role on the Flyers blue line until a late-season injury sidelined him. Hagg does a lot of the little things that go a long way in helping a defense and goaltender. He is not a standout, offensive-minded defenseman like Shayne Gostisbehere.

For the time being, Hagg is a good fit for the Flyers. With the likes of Travis Sanheim and eventually Phil Myers and Sam Morin coming up, Hagg may end up being the odd man out among the group of defensive prospects.

It seems everyone knows just how well Ivan Provorov is, even this early in his career, and the elite defenseman he can and will be in the years to come. It was especially apparent in the Stanley Cup Playoffs just how strong-willed he is to play his best and his desire to win.

Next offseason, Provorov will be a restricted free agent and it's very likely that Provorov will get a long-term contract from Hextall and the Flyers, a rarity for one of his young prospects. Gostisbehere got a six-year deal with an average annual value of $4.5 million last offseason, and Provorov's expected deal figures to eclipse that mark.

The Flyers rather quiet offseason, outside of the James van Riemsdyk signing, could be because of the upcoming contract that Provorov can get, in addition to having both Travis Konecny and Sanheim due for new contracts as restricted free agents. Wayne Simmonds will also be an unrestricted free agent, and the Flyers may still have them in their future plans when the 2018-19 season ends.

Sanheim could end up seeing a similar deal to Hagg, a bridge deal that reflects his potential upside but accounts for his limited time in the NHL. Unlike the previous season, Sanheim should make the Flyers out of training camp and play at the start of the 2018-19 season. After a great year in the AHL playing with Myers and his short stint with the Flyers showed that he has the ability to be a great defensemen going forward.

Myers, who has had his share of injury problems in the past, showed just what Hextall saw in him when he was signed as an undrafted free agent while playing last season in Lehigh Valley. Myers played equally as well as Sanheim in helping the Phantoms make a playoff run to the Eastern Conference Final.

While Myers may not get a spot on the Flyers roster to start the season, he should get a longer look in camp and be right at the top of the list of potential call-ups in the event of injuries to the blue line.

The Flyers have a great deal of talent on their blue line and it is starting to show and should bring excitement for what is to come for the future, and sooner rather than later. Hextall has made the moves that say he wants to compete now and is willing to play his young talent in order to do that.

The next step is on the players, who have to prove they are capable of playing in the NHL and handling the in-game situations it will bring. With so many of these young players already getting their feet wet in the NHL, from Hagg to Sanheim to Morin and beyond, the future on the blue line has essentially arrived for the Flyers.