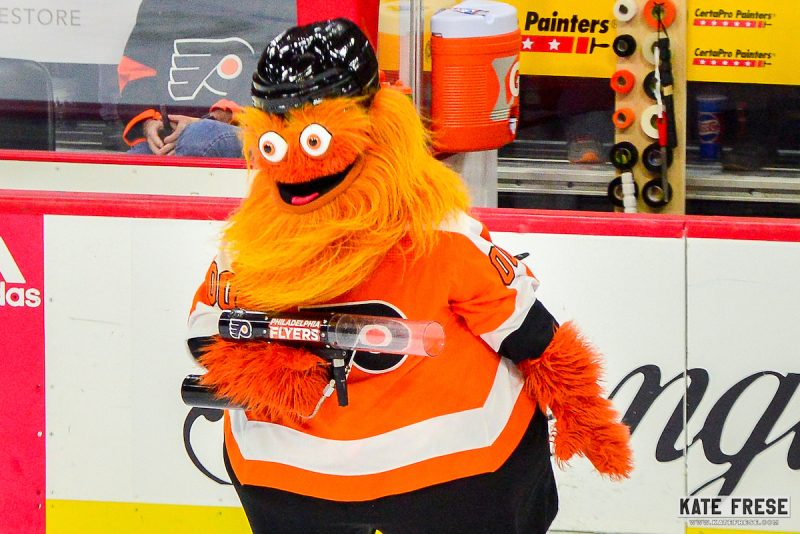 Monday’s game was more than just another preseason tuneup between the Flyers and Bruins. It marked the debut of the Flyers new mascot named Gritty, unveiled on Monday morning at Please Touch Museum.

Let’s just say it was not a sparkling debut. After the unveiling was met with criticism on social media throughout the afternoon, the in-arena appearance didn’t go much better. Gritty joined the team’s Fun Patrol on the ice to throw t-shirts to fans between the first and second period. After about 10 steps onto the Wells Fargo Center ice, Gritty lost his footing and wiped out onto the ice, trying to mask the unplanned gaffe by doing a snow angel.

Gritty was later shown on Arenavision during a “Dance Cam” break in play. Every time the orange, furry creature was shown, the crowd let the boos rain down.

Obviously, the first impression is not good.

One of the wonders in all of this is what Ed Snider would have thought of the Flyers adopting a mascot and the particulars of its appearance. Ed Snider’s grandson Garrett wrote an opinion piece for Philly.com and criticized the new Flyers mascot. The piece was titled “Flyers fans don’t need Gritty. They have grit.”

Garrett notes that some of the new renovations to Wells Fargo Center, particularly to the suite level, were still overseen by Mr. Snider in the final days of his life and represented the fire he had for his “beloved business.”

“I believe that the company's tumultuous introduction of Gritty, the new Flyers mascot, was guided by a similar pursuit of a fresh fan experience,” Garrett wrote. “That said, some fans are unhappy, and I understand why.”

Garrett writes that grit is a positive trait and one that embodies the Flyers fanbase.

“The story of the Flyers embodies the concept of grit, having been bolstered by a uniquely passionate fanbase that hasn't seen a Stanley Cup since my mom went to her junior prom,” Garrett wrote. “Flyers players have always had grit. Their fans are the grittiest in the league — and they don't need a Chucky doll to prove it. Grit is the quality that puts people back in their seats game after game, and it's one of the many characteristics of the Philadelphia fan that I think should be honored and celebrated.

“My grandfather respected his fans and he embraced their style.”

Garrett continues, writing that Gritty is a misrepresentation of the fanbase and doesn’t serve the purpose of what a mascot should do.

“Gritty aims to do the same, but it unfortunately misses the mark,” Garrett wrote. “Beyond his concerning appearance, Gritty's name represents a flawed approach to honoring the quality of our fans.

“Mascots are unifiers. They're intended to make people feel good, to lighten the mood, to add luster to the experience. They aren't meant to poke fun or sport bad attitudes.

Gritty is a miscarriage of the purpose of a team mascot. He plays into the (often incorrect) stereotype of the antagonistic Philly fan. On Tuesday morning, Gritty tweeted an unsportsmanlike shout out to his haters, something that will only stoke their dislike. It's hard to imagine that attitude unifying anyone around anything and it's the opposite of the message that a good mascot should be sending.”

Garrett also writes that the unveiling of the new mascot is an opportunity to showcase the city and its qualities.

“Whenever Philadelphia becomes the topic of discussion, we're presented with the opportunity to showcase the innovation and improvements that are happening here,” Garrett wrote. “While I'm proud of our down-home roots, Gritty makes light of our many sophisticated pursuits. I believe they should be brought to the forefront of everything we do.

“While Gritty is well-intentioned, the drama over his appearance detracts from the beauty of the Flyers game experience.”

Look, Gritty isn’t going anywhere anytime soon. The initial reaction is not going to just make it disappear after nearly two years of working with the mind behind the Phillie Phanatic to make the concept a reality.

But it was clear after one night that Gritty wasn’t for everybody, and even if it’s designed to make a connection with kids and the community at events even more than enhance the game night experience, it’s not how the Flyers should be represented, at least in the eyes of the team patriarch’s family.