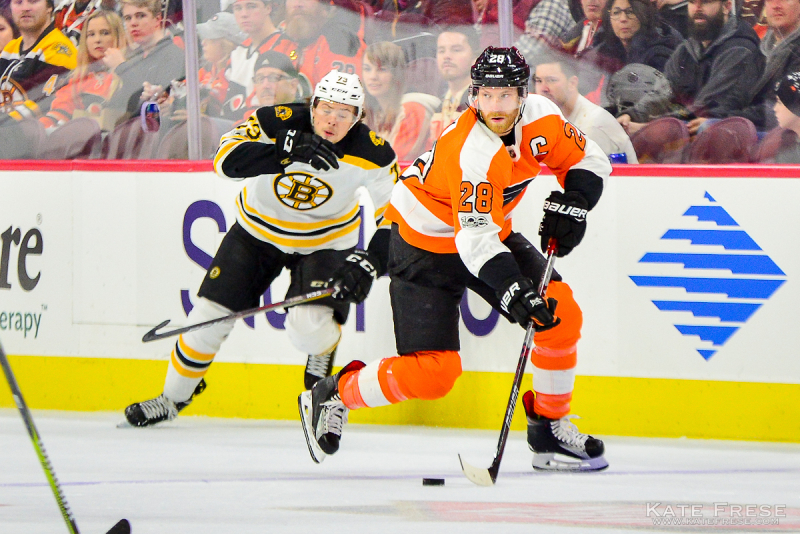 The number of games left in the preseason is starting to dwindle and so is the size of the Flyers roster. Following weekend cuts, 35 players remain on the training camp roster. In reality, the number is closer to 30 -- injured players Sam Morin, Michal Neuvirth and Alex Lyon are still taking three spots and Pascal Laberge is going to be sent to the Phantoms once cleared to return. That leaves only eight cuts needed to reach the 23-player roster for opening night.

The competition for the final spots has entered the final week of the preseason, which includes three more games for the Flyers. The first is on Monday night at Wells Fargo Center, as the Flyers take on the Boston Bruins.

The Flyers are still plugging Mikhail Vorobyev into Sean Couturier's usual spot in the lineup and he should see power play time as well.
Three of the top four lines run at Flyers camp over the weekend are in the lineup essentially. The top line -- which includes Vorobyev for now -- with Claude Giroux and Travis Konecny, the second line of James van Riemsdyk, Nolan Patrick and Jake Voracek, and the fourth line of Scott Laughton, Corban Knight and Michael Raffl.
Ivan Provorov and Shayne Gostisbehere are playing together on a pairing again. So are Robert Hagg and Phil Myers. Andrew MacDonald also makes his preseason debut alongside Christian Folin.
Brian Elliott gets the start in goal. Anthony Stolarz will serve as backup.
The line combinations at the morning skate were as follows:
Non-game players did skate on Monday morning. Travis Sanheim, Radko Gudas, Wayne Simmonds, Taylor Leier, Tyrell Goulbourne and Mark Friedman were all part a skate session prior to the morning skate. Other Flyers not in the lineup include Oskar Lindblom, Jordan Weal and Carter Hart.
The Bruins are sending a prospect-heavy roster to Philadelphia. Ryan Donato headlines the forward group after a strong start his NHL career. Veterans Lee Stempniak and Daniel Winnik are working to make the roster.
Defensively, Brandon Carlo leads the pack. Daniel Vladar and Zane McIntyre are the goalies making the trip.
The Bruins lines for Monday's game are as follows:

Where to Watch
TV: NBC Sports Philadelphia+
Radio: 97.5 The Fanatic