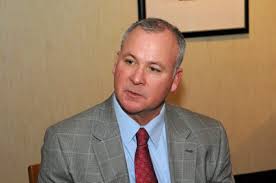 Joe Jordan, the director of the Phillies' farm system, won't return to his role in 2019.

The Athletic Philadelphia's Matt Gelb first reported Tuesday that Jordan, whose official title is director of player development, will finish out the 2018 season but will not reprise his role the following year.

The Phillies' rebuild is ahead of schedule because of how some of their young players developed. The farm director who oversaw that process will not return in 2019: https://t.co/3w7McUqWVn

Jordan, 56, was a hire of former general manager Ruben Amaro Jr. in 2011 after having worked for the Baltimore Orioles. He helped bolster a weak farm system, building the club up to No. 6 in Baseball America's rankings last season.

But under the Phillies' new regime, led by president Andy MacPhail and general manager Matt Klentak, Jordan will not return to the team. The Phils will have to find a new candidate to oversee a farm system that has dropped to the middle of the pack after graduating plenty of players to the major leagues in recent months.