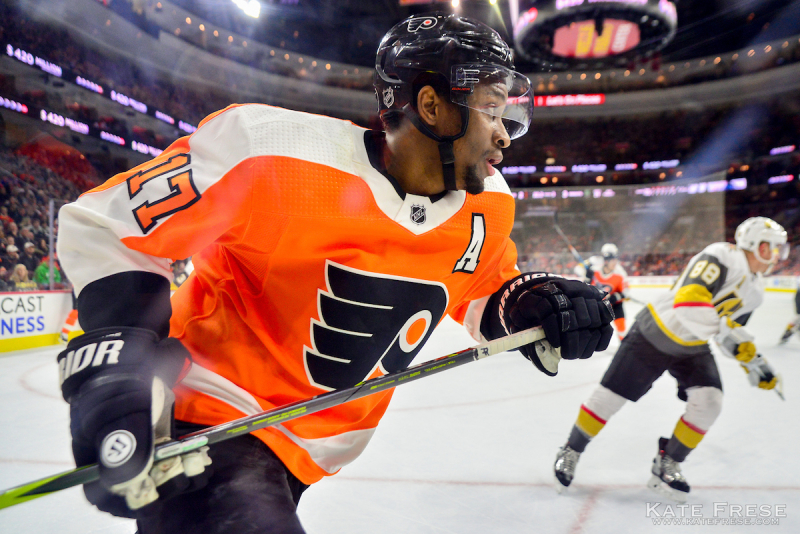 Saturday afternoon marks the Flyers second game on home ice this season and it doesn't seem like it could be any worse that Tuesday's home opener. It's not quite a distant memory yet, but the Flyers were able to put the embarrassing loss behind them with a win in Ottawa.

In just their fifth game of the season, they wrap up the season series with the Vegas Golden Knights, a team struggling out of the game with losses in four of their first five games.

Wayne Simmonds is off to a solid start in the 2018-19 season with three goals in four games, including two in the Oct. 4 opener against Vegas. In three games against Vegas, he has three goals. The Flyers top power play unit was able to strike for two goals in Ottawa and Simmonds came close to another one. If the Flyers get opportunities on the power play, Simmonds will be heavily involved as usual.
Through all of the struggles for Vegas, Jonathan Marchessault has picked up where he left off a season ago. His six points lead the team and he is part of a dangerous top line with tons of scoring potential.

Brian Elliott gets back between the pipes for the Flyers on Saturday. His last game was one to forget, allowing eight goals on 48 shots, despite making several difficult saves. Don't let the numbers fool you. He's been better than that, but he can't be left out to dry like he was in his last start on Tuesday.

There have been plenty of early-season struggles for Marc-Andre Fleury as well. Fleury was pulled in the second period of the season opener against the Flyers after allowing five goals. He managed a win in a shootout before losing his next two starts as well, but the .846 save percentage is alarming.

Based on the Flyers lines at practice on Friday, Jordan Weal will slot in and take Nolan Patrick's spot on the second line. Travis Konecny also left Friday's practice with an injury after taking a shot from Ivan Provorov off the foot, but with no firm injury update, assume for now that he's in. Obviously, a lot could change with that on Saturday morning up until warmups. The key is that the Flyers don't have an extra forward, so a call-up would be needed if Konecny can't go.