Flyers Honesty is Refreshing, But Not a Substitute for Solving Struggles 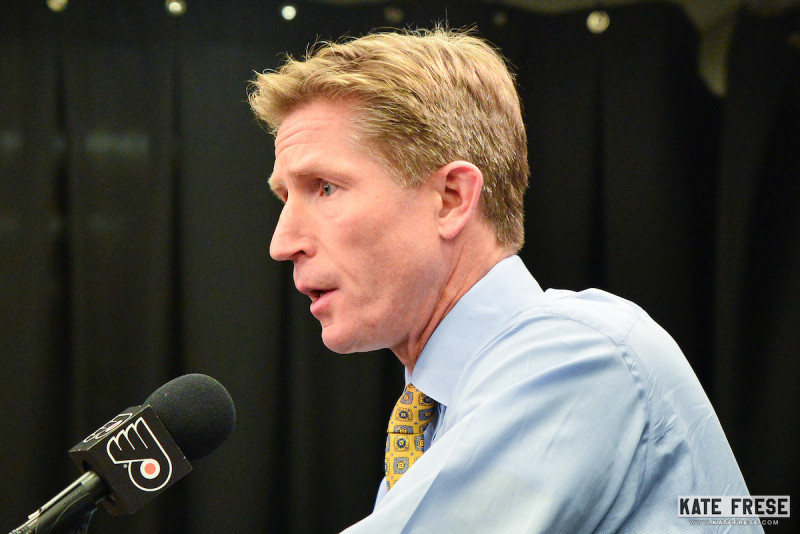 It would happen so much in previous years that it sounded like a broken record. The Flyers would lose a game 3-1 or 4-2 or 5-2 and after the game talk about how they played better than the score indicated. In reality, there was no masking what everyone could see. The eye test doesn’t lie.

So when the Flyers started off slow and lacked the crispness needed to keep pace with a sharp and confident team like the Colorado Avalanche -- off to a 6-1-2 start on their season after Monday’s 4-1 win -- the Flyers could have talked about how they had 38 shots and how Semyon Varlamov was just good and you tip your hat or about how a few bounces didn’t go their way and that’s where the game was lost.

“We didn’t have a great start today, and we’ve got to be better there,” head coach Dave Hakstol said. “You have to get off to a better start to give yourself that opportunity, especially to build that momentum in your own building. The first thing we do is take the penalty and give up the PK goal early in the game and we’re not sharp enough to turn it around before the second half of that period. That puts you back on your heels. Even though it’s a one-goal deficit and we have a pretty good second period and a pretty good third period, you’re starting from behind.”

“You see the way we play and we get down,” Nolan Patrick said. “We dominate the game. That’s something we need to do for a full 60 minutes. We can’t just wait until we’re down to start making a push like that. We’re capable of so much more.”

“I think it’s just a mindset,” Travis Sanheim said. “I think coming in we got to be more mentally focused and ready to go when the puck drop starts.”

“That’s not a winning recipe,” goalie Brian Elliott said. “That’s not how we want to come out, it just seems to happen right now and we have to get that turned around.”

Across the board, it seemed like the answer was the same. There was no sugarcoating a terrible start and an overall lack of effort for the better part of the first 20 minutes.

Hakstol wasn’t wrong by calling it a pretty good second period and third period. The Flyers, in fact, dominated the third period for a solid 10 to 12 minutes after Patrick scored to cut the lead to two. The problem was that the Flyers couldn’t chip away at the lead any further and the momentum they were building faded fast. The problem also remains that the Flyers back themselves into a corner where one mistake essentially puts the game away -- see Gabriel Landeskog's breakaway goal early in the third to make it 3-0 Colorado.

But look at the three other games where the Flyers have fallen behind since that game. On Monday against Colorado, it took 3:23. On Saturday against New Jersey, it took 4:07. Last Tuesday against Florida, it took 17:58, but the Flyers were outshot in the opening 20 minutes, 12-5.

The one thing these games have in common is that they are all on home ice, and they can suck the life out of a building before a game even gets into a rhythm. In the case of the last two games, the Flyers took an early penalty that resulted in a goal.

So what’s the problem?

“We had a good start two games ago, today it wasn’t good enough,” Hakstol said. “We looked exactly like we didn’t practice yesterday and we didn’t. We were coming off a day when we were off the ice yesterday. We had a good morning skate this morning and had an opportunity to be crisp and that didn’t carry over to our start and that’s not acceptable.”

The follow-up question to that asked if that is a characteristic of the team. Hakstol shot back with brutal honesty.

“It has been too many days and too many games this year.”

This year. In years past, it hasn’t been all that different.

The term slow start isn’t just in terms of 60 minutes. It’s in terms of 82 games and falling behind. Wasn’t this a problem before in Hakstol’s tenure?

“Early on I thought that was an issue for us.”

Again, a follow-up, asking if it’s a quality of the early season play of the team, produced a quick answer snapped back.

“Well, it better end pretty quick,” Hakstol said. “I’m not ducking it. I’m saying…” Hakstol paused and pointed to himself. “Gotta be better.”

It’s pretty telling that the head coach of the team that did try to sugarcoat things behind good effort and compete in the past isn’t falling for it anymore. The eye test isn’t lying to anyone. He’s seeing what we’ve seen. It’s terrible effort and poor execution compared to the opposition.

It also says a lot that the coach looks like he’s shouldering some of the blame. Last season or any before it under Hakstol, he was have stood there stoic, answered the questions, defended the team for a better effort and performance than what the score indicated.

The season is just nine games old. It’s not the first time the Flyers have stumbled out of the gate and fallen back on their heels. Perhaps that is also a sign that Hakstol knows this is a season where the team needs to take a bigger step forward than just playoff appearance. Perhaps he’s fully aware that anything short of that, given the improvements made on paper, is unacceptable. Perhaps he’s already seeing the challenge ahead, what will happen if it continues any longer. The Flyers could be in for that uphill climb to the playoffs again, when they needed to prove that they had otherwise grown beyond the slow starts, the on-again, off-again work ethic and the inconsistencies.

It leaves them with a lot to work out in the next few games. How does it get addressed?

“You address it direct and keep pushing on it,” Hakstol said. “I liked our start two nights ago and then we come out tonight and we’re not sharp, we’re not ready and we’re not crisp with the puck and that puts us back on our heels.”

Hakstol went back to the early penalty call. He barked at the officials after the call. He was discussing it again with officials after the period ended. In his postgame meeting with the media, he noted that after seeing a replay, there was no argument. It was a penalty. “That’s on us,” he said.

While the honesty is refreshing, it doesn’t serve as a substitute for putting in the work and addressing the problems. It doesn’t improve the penalty kill. It doesn’t stop the turnovers. It doesn’t make the play crisper or the starts better.

And that’s the Flyers challenge, to step up and take these honest statements, look in the mirror and do something about it, before people have once again checked out on the season before it even gets going.