Is It Time for the Flyers to Make a Change? 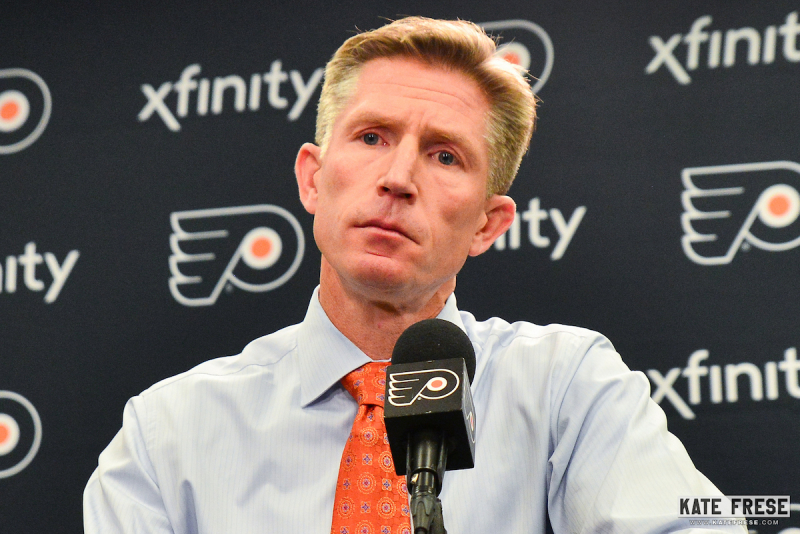 When the Flyers began training camp a little more than a month ago, there was a sense that it was time to start making an impact among the other NHL teams. They had signed a big-name free agent. They opened up space for more kids to enter the lineup full-time. There wasn’t much dead weight left and Ron Hextall, Dave Hakstol and the coaching staff couldn’t hide or make excuses behind waiting for players to come off the books or young players to develop.

It was time to take a step forward.

After 11 games, the Flyers have been an uninspiring team. They have a 4-7-0 record, the perfect symbol of mediocrity.

To his credit, Hakstol isn’t even trying to hide it anymore. “We’re a game under .500. Boy, that’s mediocre at best,” Hakstol said last Wednesday. “Now you have to back away and really look at the performances and evaluate the performances of your team but I think if we want to be honest with ourselves, the performance of our team equals our record right now.”

There are times now where it seems Hakstol has given up on trying to find the positive spin on games, sounding more like a coach defeated than a coach with an overabundance of positivity. Maybe that’s because there is nowhere to hide anymore.

Yes, execution is a problem that falls on the players. Yes, being prepared to start games is a problem. But how many times can you play a similar game, lose by two or three goals and express frustration before it becomes tiring to the point where change has to be made? It feels like we’re getting to that point.

If a change were to be made, it doesn’t mean it will be Hakstol, at least not immediately. Hextall placed a lot of trust and truly invested in Hakstol four years ago. He’s not going to budge over 11 games. But at what point would he and how would he? Do you make a change to the assistant coaches? Do you make a trade? Is Hakstol’s seat hotter than we think?

The reason all eyes on are Hakstol is because history implies that the seat will potentially reach a boiling point this season.

Hakstol is right around the number of games coached that three of his predecessors reached in their fourth season at the helm. It started with Ken Hitchcock, fired on Oct. 22, 2006 after coaching 254 games with the Flyers. John Stevens replaced him and was the head coach for 263 games until Dec. 4, 2009. Then Peter Laviolette took over and was the head coach for 272 games, third-most in Flyers history, before being fired on Oct. 7, 2013. After two seasons under Craig Berube, Hakstol was hired and already ranks seventh all-time in games coached with the Flyers with 257.

No one is going to approach Fred Shero’s mark of 554 games over seven seasons. Coaches just don’t have that kind of shelf life in today’s NHL. But when you consider that second on the Flyers all-time list is Mike Keenan at 320 games behind the bench and lasted exactly four seasons, it’s telling to the way the Flyers have gone about with coaches and patience.

Just look at the coaches of the last 24 years since Mike Keenan:

Hakstol is at 257 games behind the bench. If he lasts through the 2018-19 season, he will be second all-time in games coached with the Flyers at 328. There’s one main difference with Hakstol and the other seven coaches in the top eight in games coached with the Flyers, only one of which made it beyond the four-year mark. Paul Holmgren, Hitchcock and Stevens took a team to the Eastern Conference Final. Pat Quinn, Keenan and Laviolette took a team to the Stanley Cup Final. Shero was the bench boss for the only two Stanley Cups in franchise history.

Hakstol has yet to make it past the first round of the playoffs.

Ultimately, the Flyers patience level was always thin after Shero. Ed Snider wanted another Cup. If a coach wasn’t getting it done within a four-year span, he was the scapegoat, especially if the team had its struggles early in the year.

Maybe the days of making a move five games into a season are over. But the Flyers have two games remaining in October, 12 in November and 14 in December.

Notice how some of the end dates for coaches was right around the beginning of December? That usually means that if a coach was given the benefit of the doubt for struggles in the first five or 10 games of the season, but by game 25 or 30 things hadn’t changed much, time was up. That could be the case here if things don’t start improving.

The Flyers are digging a hole again, and they will waste their energy digging out of it. Even if there is a playoff appearance as a result, the players are spent physically, potentially fighting injury and not on the same level as the opposition.

Perhaps then, the only way to get ahead of the curve — and not be chasing the playoffs the way they have chased games this season — is with a new voice. The Flyers have had the same head coach for the last three seasons, now on the fourth of his tenure. They have had two of the three assistant coaches on staff since 2014, Hakstol’s first season. Only one has been with the team for less — Kris Knoblauch, hired in 2017 to replace Joe Mullen, who was an assistant for 10 seasons.

Maybe it’s not time right now. But time is running out on that.