Eagles Flyers Phillies Sixers Union About Us Write For Us
Flyers Honesty is Refreshing, But Not a Substitute for Solving Struggles
Joel Embiid's hot start is nothing short of historic 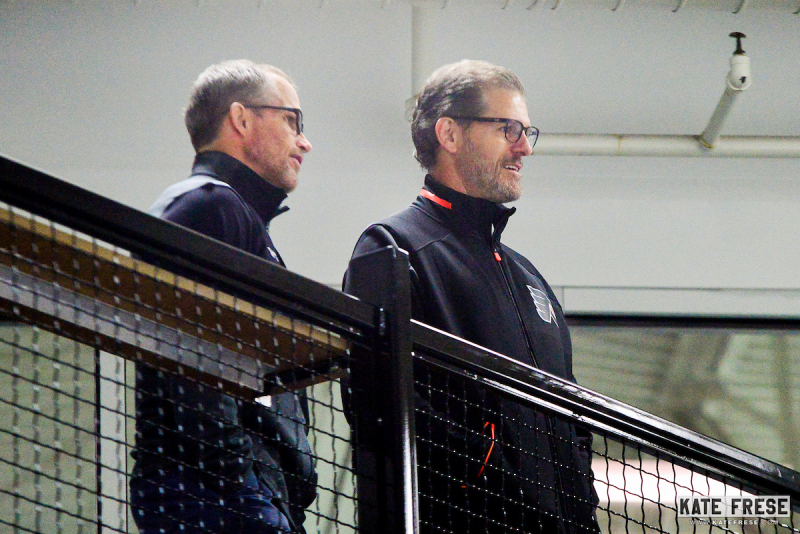 The Flyers have won four of their first nine games of the season. It hasn’t been uncommon for the Flyers to not exactly build up a high number of wins in October, but the lines between wins and losses is a lot less blurry this time around.

They have yet to string together back-to-back wins, and the difference between wins and losses has been night and day. To this point, the team has played just one game beyond regulation and won in a shootout. Otherwise, the games they are losing typically aren’t there for the taking at the end.

You can look straight at the record, but the play on the ice is far more concerning. The Flyers have struggled with execution and hence, once again, are struggling to be consistent at anything other than being consistently inconsistent. It’s the same old song and dance that is maddening to Flyers fans. Imagine how GM Ron Hextall feels then.

It’s pretty easy to identify the Flyers biggest problems. Aside from a sputtering power play and a penalty kill that has found a way to start the season worse by the numbers than a season ago, it’s slow starts that have doomed the team, including on Monday night in a 4-1 loss to Colorado. It’s pretty evident the team isn’t ready to play and work for opportunities.

“Individually, players got to be ready to play,” Hextall said. “That’s what the warmup is for, to get ready to play the game. You have to start hard. We’re on too level of a playing field here to say, ‘OK, we can donate the first 10 minutes.' It doesn’t work like that. You’re not gonna win too many games. That’s the consistency part. We have to be more ready to play individually and collectively.”

After a frustrating loss in Columbus, head coach Dave Hakstol spoke at length about giving up too many home run plays and noted mistakes on one specific goal by Claude Giroux and Jake Voracek. He did it again after Monday's loss, noting a mistake by Sean Couturier on a penalty kill and an early penalty by Jordan Weal. The main players, the core that has been for several seasons, has certainly had their share of bad games and pitiful performances already in just nine games. But Hextall isn’t singling anyone out. On nights where the team has mailed it in at the start and fallen back on their heels, like Monday night, it’s a collective team problem.

“We need some impact performances from our whole group,” Hextall said. “If not, we’ll see what’s out there. You’re trying to make your team better every day and when we’re playing like this, it’s concerning. We need to show up on a more regular basis from minute one to minute 60.”

The 82-game season is essentially the same as a 60-minute game. Fall behind in the race early and you’re frantically chasing at the end with no margin for error. The Flyers had their only winning October last season before a 10-game losing streak over the last half of November put them into chase mode again.

With just three games remaining in October, it would take wins in all three to ensure a winning October. That would be the immediate turnaround the team needs. But the NHL is competitive and every game is difficult. The Flyers don’t have time to take a period off here or a shift off there and expect to come away with three wins and six points in a week.

Instead, the Flyers can’t string together wins. Their top free-agent acquisition was hurt in the second game of the season and out for weeks. They have dealt with another number of injuries as well. They have seen the same inconsistent play across the board. Yeah, same old Flyers indeed.

And the players see this too. They are more honest than ever in their comments that the play isn’t good enough. There haven’t been any moral victories in losses that don’t produce points. If anything else, the players are frustrated, which is what Hextall wants to see when things aren’t up to expectations.

The next chance to play better comes on Thursday night, but the road doesn’t get any easier. The Flyers couldn’t avoid falling behind the eight ball again. Now each game will have playoff implications for them, even if it seems like it’s too soon to even think about watching the standings.