Eagles Flyers Phillies Sixers Union About Us Write For Us
Reds Hire Former Phillies 3B David Bell as Manager
Eagles Armchair: For the NFL, roughing the passer isn't bad for business 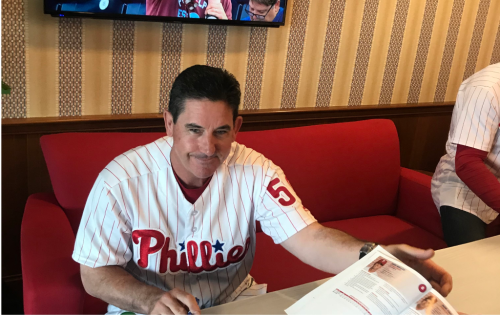 While former Philadelphia Phillies third baseman David Bell is a "possible favorite" to become the next manager of the Cincinnati Reds, the club's current bench coach, Rob Thomson, could similarly earn a Major League managerial role with the Toronto Blue Jays.

According to Fancred's Jon Heyman, although Thomson is "well-respected and well-liked," but "just not that well-known," he "makes sense as a candidate" to replace John Gibbons as the Blue Jays manager for the 2019 season.

The belief is the Blue Jays will hire someone young to grow with their young team. Stubby Clapp, who won two Manager of the Year awards with Triple-A Memphis, could be a candidate. Clapp is a Canadian, which doesn’t hurt.

Mark DeRosa, who finished his career in Toronto and appears to be a hot candidate, plus two more from MLB Network — Sean Casey and Dave Valle — could be of interest. If Clapp is hired, he’d be the first Canadian to hold the position with the Jays.

Phillies bench coach Rob Thomson is another well-regarded Canadian, and he'd make sense as a candidate, too.

Thomson was in the running to succeed Joe Girardi as the New York Yankees' manager last offseason after spending 28 seasons within the organization, however he lost the job to Aaron Boone on Dec. 1. Thomson ultimately joined Gabe Kapler's staff four days later.

Thompson filled in for manager Joe Girardi for three games in 2008, and was believed to be the first Canadian to "manage or stand in to manage a major league game since George "Mooney" Gibson in 1934, according to MLB.com. Thompson also previously managed the Short-Season A Oneonta Tigers of the New York-Penn League in 1995.

Kapler has already said the entire Phillies coaching staff will return in 2019. It is not known, however, if the Sarnia, Ontario, native in Thomson — along with Fuld or Velandia — would leave to join other organizations as manager, if offered.