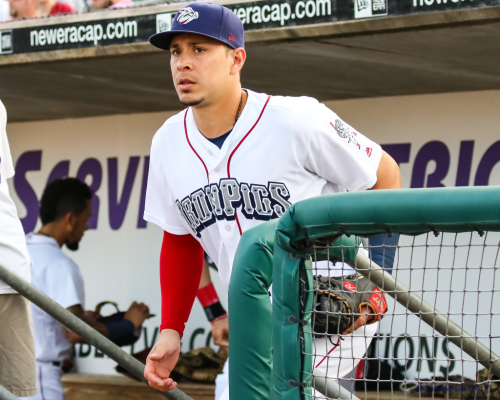 The Philadelphia Phillies' first post-World Series transaction was not re-signing a veteran player, or restructuring a worthy player's contract, such as ace Aaron Nola. Instead, the club released minor-league 1B/OF Joey Meneses, according to The Morning Call's Tom Housenick.

Meneses, 26, was released so he could pursue an opportunity to play for the Orix Buffaloes in Japan. The move comes somewhat as a surprise, given the Culiacan, Mexico, native was named International League Most Valuable Player in 2018.

In 130 games and 536 plate-appearances at Triple-A Lehigh Valley, Meneses slashed .311/.360/.510 with 23 home runs and 82 RBI, and yet, he was never considered for a call-up, let alone with expanded rosters in September. As Housenick notes, Meneses also nearly became the International League's first triple crown winner since Hall of Famer Jim Rice in 1974.

The Phillies simply had no room for Meneses on their 25-man roster, especially with either Carlos Santana or Rhys Hoskins to be the first base starter in 2019. The club's outfield depth also leaves little to no room for Meneses' services. The club hopes to add Bryce Harper to any combination of Roman Quinn, Nick Williams, Odubel Herrera, Aaron Altherr, Dylan Cozens, and possibly Hoskins, depending on Santana's status.

Despite the logjam, you would think the club could get at least something in return for a "Most Valuable Player" of a Triple-A-level league, prior to granting his outright release.