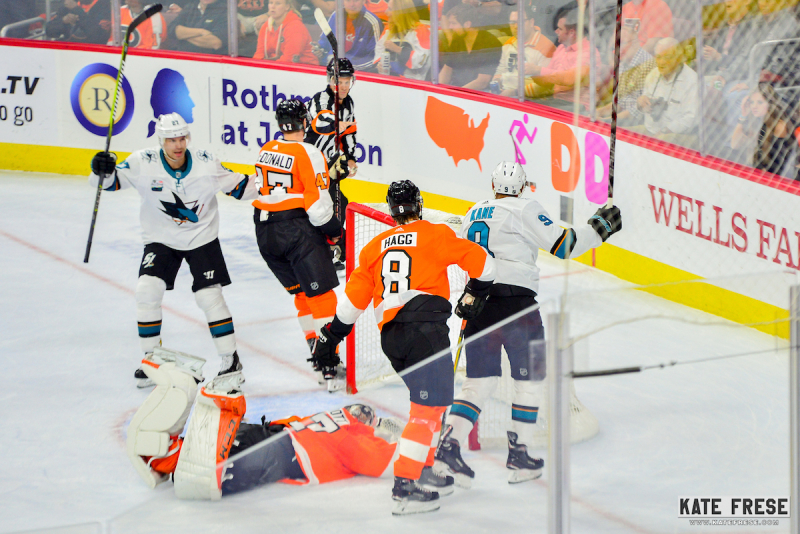 The Flyers looked like they could smell that first goal with extended offensive zone time in the first three minutes of the game. One turnover and one odd-man rush changed all of that.

The Flyers opened the game in control of the first three minutes, nearly scoring on some great possession time. One mistake turned the period around for the Sharks and started the Flyers spiraling for the next 17 minutes.

Ivan Provorov coughed up the puck at the Flyers blue line, leading to a two-on-one for the Sharks led by Logan Couture. Couture took the shot and beat Brian Elliott through the five-hole to give the Sharks the lead at 3:17.

It took just 11 seconds for the Sharks to capitalize again. Kevin Labanc made a toe-drag move in the slot and let go a shot that was sticked aside by Elliott right to a waiting Joe Pavelski. Pavelski didn't get all of his shot, but it was another to flutter a rebound into the net for a second goal.

From there, the Flyers squandered a power play opportunity and allowed the Sharks to continue to get prime scoring positioning in front of the net. Elliott actually settled in and was back to bailing out his teammates for their mistakes and coverage errors. At the 12:21 mark of the period, Elliott appeared to make his latest brilliant save, diving across to rob Pavelski with the glove right along the goal line. But upon video review, the puck completely crossed the line before Elliott could direct the puck out. It was correctly ruled a goal and a 3-0 Sharks lead.

On a power play four minutes later, the Sharks capped off a huge period with another goal, as Evander Kane got a deflection at the side of the net to make it 4-0 San Jose.

The Flyers got an early power play in the second and finally got on the board. Wayne Simmonds started a scrum around the net after trying to tuck the puck home. He managed to fish it loose and get it to Claude Giroux, who passed back to Shayne Gostisbehere for the one-timer to get the Flyers within three.

The Flyers had their chances to cut into the lead from there. A couple of close scoring opportunities just missed and the Flyers also failed to take advantage of another power play.

The Sharks got a power play seconds after the Flyers power play expired. The Flyers were able to kill it off, but the Sharks scored seconds after it expired. Once again, it was Kane with the goal, scoring on a snipe from the slot bar down on Elliott.

The Flyers failed to score on another early power play and the Sharks were able to capitalize on one in the third. Erik Karlsson fired a shot from the point that was stopped, but Tomas Hertl was all alone on the doorstep to knock in the rebound to make it 6-1.

Late in the game, the Sharks piled on and completed the extra point, as Timo Meier undressed Andrew MacDonald and put a nice move on Elliott to score.

Labanc finished the game with four assists. Vlasic and Erik Karlsson each had two assists, joining Pavelski and Kane with two-point games. Simmonds had a goal and an assist for the Flyers.

Elliott made 40 saves in the defeat. Aaron Dell stopped 31 shots in the victory.

The Flyers have a quick turnaround, taking the ice again on Wednesday night in Ottawa against the Senators.