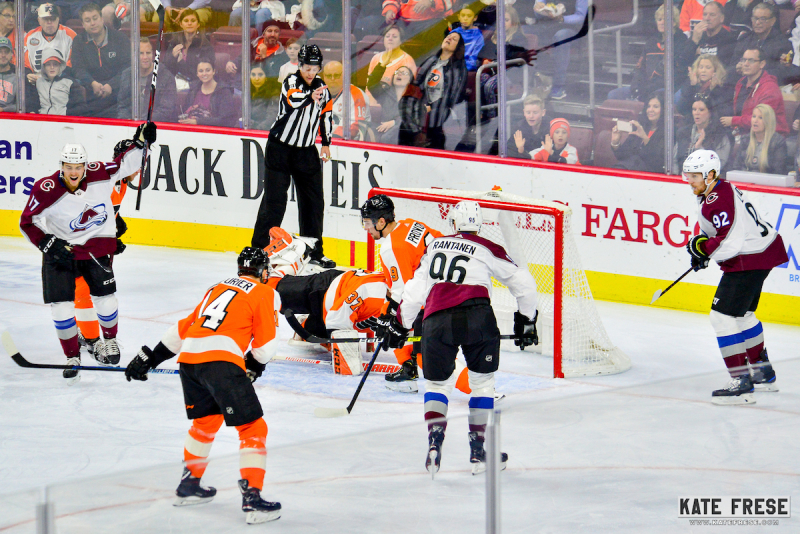 For the eighth time in nine games, the Flyers allowed the first goal to the opposition. For a majority of the game, that was the only goal. With another late goal in the second and early goal in the third, the Flyers put themselves in a hole they could not climb out of.

Colorado outworked the Flyers for the better part of 40 minutes, before the Flyers late push ultimately fizzled into nothing in a 4-1 loss to the Avalanche on Monday night.

An early power play for the Avalanche led to a goal to open the scoring. Gabriel Landeskog fed Mikko Rantanen at the right circle for a chance that Brian Elliott stopped. The rebound went to Nathan MacKinnon and Elliott got across to stop his chance as well. But on another rebound, MacKinnon corralled the puck and threaded a pass to the slot for Rantanen with a wide open net for the easy tally, his third of the season.

The Flyers had to kill off another penalty in the first to keep the Colorado lead at one. Shots through 20 minutes were 14-11 Avalanche.

The Flyers failed to take advantage of two power plays in the second period in an effort to tie the game, but started to apply more pressure as the period went on. Shortly after coming short of tying the game on a shift by the second line, the top line failed to finish a shift in the defensive zone, widening the gap.

Matt Calvert took control after weak clearing attempt by Robert Hagg and managed to center for Matt Nieto, who beat Elliott through traffic for his first goal of the season to make it 2-0 Colorado.

The Flyers got a power play with two seconds remaining in the third, starting the final period with 1:58 on the man advantage.

Not only did the Flyers let the opportunity get away, they surrendered another goal shortly after that essentially put the game out of reach.

Claude Giroux whiffed off a face-off and Landeskog took control on a breakaway the other way, going to the backhand to beat Elliott to make it 3-0 Colorado.

One minute later, the Flyers got on the board as Nolan Patrick deflected a shot by Travis Sanheim through the five-hole of Semyon Varlamov to make it 3-1.

That was as close as the Flyers would get as the Avalanche scored an empty-netter with 1:15 to play as Rantanen picked up his second goal of the game.

Varlamov made 37 saves in the win. Elliott stopped 29 of 32 shots faced in the loss.

The Flyers are back on the ice on Thursday night on the road to face the Boston Bruins. Game time is at 7 p.m.