Eagles Flyers Phillies Sixers About Us Write For Us
Could a Maikel Franco Trade to the Padres Be Imminent?
Through 20 Games, Flyers at Same Mediocre Mark 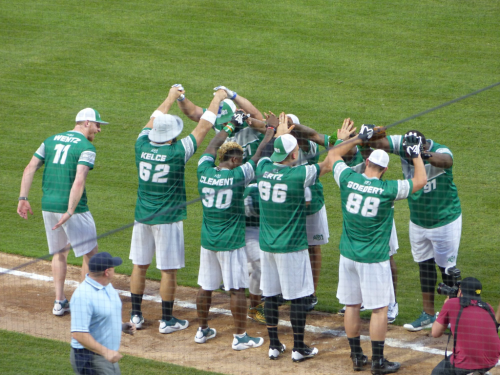 The highly successful Carson Wentz AO1 Foundation Charity Softball Game will return to Citizens Bank Park for its second annual event this spring, May 31, while the Philadelphia Phillies embark on a six-game west coast trip.

The @Eagles and @cj_wentz are headed to Citizens Bank Park on Friday, May 31! That’s right, we’re back for the 2nd annual AO1 Foundation Charity Softball Game. Tickets go on sale in February – more details to come! #AO1LeaveYourMark pic.twitter.com/qLyrv76OJh

Tickets will go on sale this February, with the exact date to be announced on the Foundation's social media. Parking will be free, with gates opening at 5:30 p.m. Funds raised will benefit the Foundation's three initiatives — the Haiti Sports Complex, Thy Kingdom Crumb Food Truck and the AO1 Foundation's Outdoor Program.

Wentz was not able to play in the inaugural event, still recovering from his torn ACL and LCL injuries. Offensive guard Stefen Wisniewski won the derby, while Team Wentz defeated Team Hicks.

It will be interesting to see Wentz play this year, and exactly which other Eagles participate.