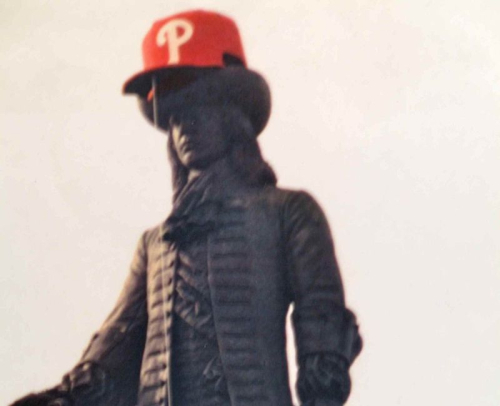 You can call this the ultimate case of a buyer's remorse. And no, it is not Philadelphia Phillies Managing Partner John Middleton dishing out a record-setting contract this offseason, but rather a fan selling an infamous relic of city and club history.

For the second time in just over three years, the red Phillies "P" hat that rested on top of the William Penn statue on City Hall during the 1993 World Series is being auctioned off on eBay.

You can own the hat — partly credited for the "Curse of Billy Penn" and years of championship-less seasons among Philadelphia's sports teams — for a conveniently "low" price of $10,000. For that money, you can purchase 83 Rhys Hoskins jerseys, or one full season Standard Diamond Club Seating package (Rows 10-19) for one seat, with $280 to spare.

BillyPenn.com's Mark Dent describes how the hat came to fruition:

This story that seems like could only happen in Philadelphia started in 1993. The Phillies advanced to the World Series against the Toronto Blue Jays, generating widespread excitement throughout Philadelphia. Then-mayor Ed Rendell caught the bug, too. He came up with the genius idea of constructing a massive Phillies cap and placing it atop the Billy Penn statue. The Phillies paid for it. Mummers designer extraordinaire Dave Moscinski built it, climbing atop the Billy Penn statue so he could measure his head. For two days, he toiled in his workshop to make the 7-foot-tall, 4-foot-wide hat. Moscinski used chicken wire, steel rods, flexible foam and red Veloop fabric in the construction.

EBay user Glen Spence, or mvlsports, first sold the hat in August 2015, also for $10,000. This came 20 years after he and his friends trashpicked it from a Veterans Stadium dumpster. The Phillies originally planned to display the hat in a case at Veterans Stadium some time after the 1993 postseason run, however due to its controversy the club accordingly backed away and "threw it out" a couple of years later.

Center City Philadelphia, urbane and glistening amid the surrounding blight, has passionately embraced the raggedy Phils, who until last year often were booed even at home. Silk-suited lawyers walk to their appointments in red Phillies caps. A soaring iron statue of William Penn, who stands devoutly atop City Hall, now bears a huge red cap with a white "P." (It was hoisted there by ironworkers, donating their time). Mayor Ed Rendell said he received some complaints about "desecrating Billy Penn," and quoted the response of his bodyguard: "If Billy Penn were alive he'd love it."

To help feel less burdened by the current $10,000 auction, eBay suggests a $417 monthly payment for two years. Yet again, purchasing 83 Hoskins jerseys or a Diamond Club seat to every home game this season seems like a more feasible investment.