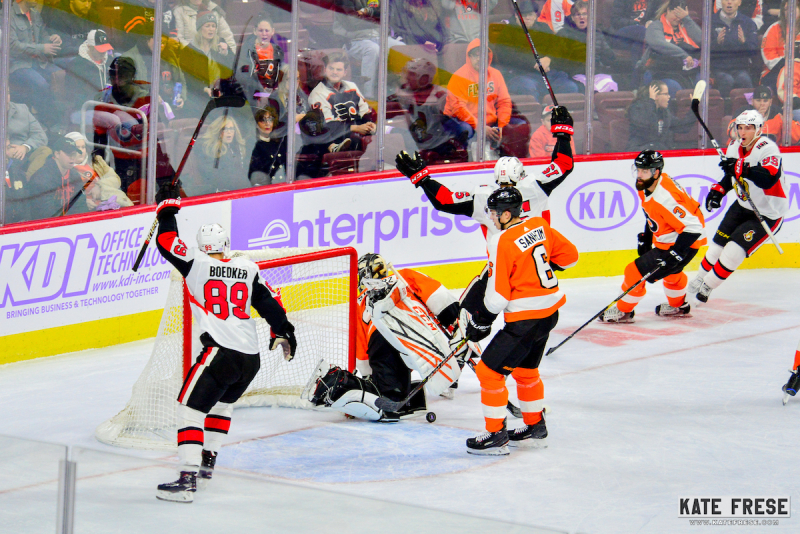 For 50 minutes, the Flyers played like everything hung in the balance -- the coaching staff, the playing roster -- so much was up for possible change in the coming days and weeks. As a result, the Flyers built a 3-1 lead after two periods, controlling play in the middle 20 minutes.

But as the final minutes of the third approached, the Flyers became more passive. The Senators struck for three goals in 5:29 to turn the tables and take a 4-3 win from the Flyers on Tuesday night at Wells Fargo Center.

The Flyers opened the scoring in the game with a nice play from Claude Giroux setting things up. Giroux collected the puck at the blue line and delayed with some nice stickhandling. Giroux set up Travis Konecny for a one-timer that rocketed past Mike McKenna to put the Flyers on the board.

Just over a minute later, the Senators scored to tie the game. Thomas Chabot had a shot chance come right back to him, and he let go a quick release that deflected off Oskar Lindblom and beat Anthony Stolarz to tie the game.

The Flyers also had to kill off two penalties in the period and did so successfully. Dale Weise and Ben Harpur also dropped the gloves in the first.

The Flyers were headed to their first power play of the game on a delayed call, when they scored to retake the lead. Ivan Provorov got the puck with space and found Jake Voracek cutting through the slot. Voracek took the pass and shot through the five-hole of McKenna for his sixth goal of the season.

At the six-minute mark of the period, a point shot by Radko Gudas hit an Ottawa defender and deflected past McKenna for his first goal of the season. It was Gudas' first goal in 47 games.

The Flyers also killed off another penalty late in the period to carry a 3-1 lead to the third period. After 40 minutes, shots were 27-15 Flyers.

The Flyers didn't extend the lead in the third, but kept the pressure up through the first 10 minutes of the period. In the last half, they became more passive, and it cost them.

Off a rush, a shot by Mark Stone hit the post. Stolarz was unable to locate it and as he scrambled to cover, Brady Tkachuk found the loose puck and scored to cut the lead to one with 8:28 to play.

Tkachuk struck again, getting a deflection on a Chabot shot with 6:34 to play to tie the game at three.

As the game wound down to three minutes remaining, Matt Duchene made an impressive play. After his initial shot was partially blocked, he managed to bat in the rebound and beat Stolarz to give Ottawa a 4-3 lead with 2:59 remaining.

The Flyers never managed the equalizer in the final minutes, suffering their sixth loss in the last seven games.

The Flyers are off until Saturday when they travel to face the Pittsburgh Penguins. Game time is at 7 p.m.