Described as a "monumental shift in visual identity," the new logo — while still embracing the league's legacy — "signifies the path moving forward as a next-generation sports league," according to the AFL's press release.

“We are excited to announce the League’s new logo, which represents the new direction of the AFL,” said Commissioner Randall Boe. “This marks the beginning of many changes to come from the League, including a uniquely modernized and gamified experience for fans. The new logo represents the high energy momentum of the League that we are excited to share with everyone.”

In creating the new logo, the AFL worked with Chuck Kacsur Design to symbolize "the modernization and revitalization of the league," and signalize “the exciting future of gamification and new technologies the AFL will employ.” Like the league itself, the design represents the "movement toward the future" as it "restarts with a visionary mindset."

The AFL writes in its press release:

AFL games are perfectly designed for a game-oriented world that is increasingly reliant on broadband high-speed internet. ...

The new logo, which is optimized for digital space, includes brighter color shades which were carefully selected in the design process. While the font is reminiscent of what was previously used, brighter colors were selected to be youth-oriented and to convey a higher level of energy.  Its elements were deliberately refined with modernization and gamification at the forefront.

... The League is prepared to make a strong mark in the sports industry in 2019. Its new visual identity is future-ready, brings a new life to the Arena Football League and signifies its new direction.

Boe said the AFL believes the arrival of legalized sports betting is an "exciting opportunity" for the league. The AFL will use and encourage fan use of the hashtag #BetOnUs across all digital platforms in 2019. “Our games are exciting and action-packed. On average, more than 90 points are scored in every game," he said. “We think that fans will enjoy betting on Arena Football games and think that will help drive fan engagement and excitement."

"#BetOnUs also signifies our commitment to expanding the AFL and bringing our exciting games to as many fans as possible.” 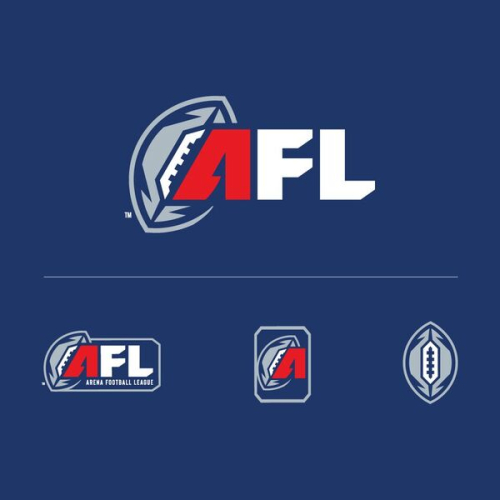 Various iterations of the new logo — seen above — will be used in different spaces, including mobile application badges and jersey patches, according to the AFL. All logo iterations were designed with both brand identity and consistency in mind.

The second Philadelphia Soul player tryout in Pitman, New Jersey, will take place on Saturday, Jan. 19. Teams currently in the AFL include the Soul, Albany Empire, Baltimore Brigade and Washington Valor. Rumored expansion cities, not yet confirmed by the AFL, include Atlantic City, New Jersey, and Columbus, Ohio.