Eagles Flyers Phillies Sixers About Us Write For Us
Report: Flyers to Name Chuck Fletcher as New GM
Sixers Playing Well Heading Into Showdown In Toronto

Broussard on Embiid, Simmons: 'They don't work that hard' 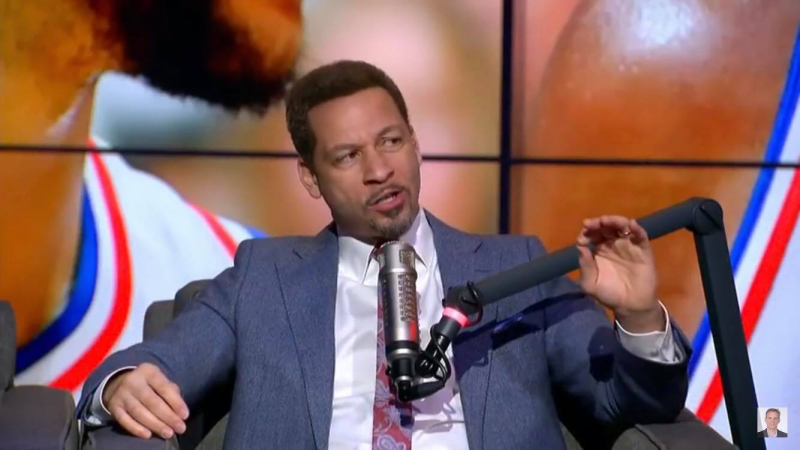 The Philadelphia 76ers are 8-2 since Jimmy Butler joined the lineup and the team just finished off a 3-0 week, defeating the Knicks, Wizards and Grizzlies -- all teams they should beat. Butler has hit two game-winners at the buzzer and converted on a tough fadeaway late in Sunday's game against Memphis, which ended up being the dagger. For all of the talk of his toxic personality and leadership tactics, things seem to be going smoothly.

When things go smoothly, leave it to the national media to make things up to stir the pot. Last week on The Herd with Colin Cowherd, Chris Broussard joined the show to talk about a number of topics, one of which was the Sixers post-trade. Both Broussard and Cowherd talked about how they liked the move, but how it could still go wrong. What's baffling about the conversation is that Broussard claims that two of the Sixers youngest starts, Joel Embiid and Ben Simmons, don't put in the work.

"When is Jimmy gonna assert his leadership? As great as they are, Joel Embiid and Ben Simmons, they don't work that hard," Broussard said. "They don't. Now they're not soft like the guys in Minnesota, that's what rubbed Jimmy the wrong way. He thought they were soft and that they didn't work that hard."

Broussard thinks Butler will play the observer role until his signs a max contract, and then he'll start speaking up more about things and become the leader of the team. He went on to talk about Embiid's practice habits, indicating that head coach Brett Brown has little control over what the Sixers' big man does.

"Embiid doesn't like practicing. He's left shoot-arounds early, practices early...and Brett Brown doesn't control him. Embiid does what he wants. Jimmy works his butt off, Jimmy's been at the gym at 7am on game days running."

Broussard doesn't name any sources on this information, which leads us to believe it isn't completely true and it is mostly speculation. Joel Embiid is extremely critical of his play and mentions after bad games that they need to look at film and fix things. Meanwhile, Embiid and Simmons post Instagrams/Snapchats at the gym or workout facility pretty frequently, so if you miss those basic signs as a national NBA guy...maybe you need to do your research a little better.

"Hopefully these guys learn from him [Butler]," Broussard went on to say. "You know how many times I've been on here saying I love Simmons, I love Embiid. They could be Kareem/Magic, they could be Shaq/Penny, but they have to work hard, and they don't."

Some would say they are already learning from Butler. Sure looks that way so far. As for working hard? Embiid is in the midst of an MVP-caliber season, averaging 27 points, 13.4 rebounds and 2.0 blocks per game while Simmons is averaging a stat-stuffing 15.5 points, 8.8 rebounds and 7.9 assists.

Draw conclusions from this if you want, but it seems much more important to focus on Butler and his new teammates building strong chemistry as the season progresses rather than when/if the shoe will drop. If things continue to trend like they are now though, it could mean big trouble for the rest of the Eastern Conference come playoff time.