Eagles Flyers Phillies Sixers Union About Us Write For Us
Post-Game Recap: Eagles Have Best Performance All Season
Eagles Armchair: Play action and commitment to run are key in win over Washington

First it was Freddy Galvis, then it was J.P. Crawford. Finding the next perennial All-Star-caliber shortstop has not been easy for the Philadelphia Phillies since Jimmy Rollins was dealt away from the club to the Los Angeles Dodgers after the 2014 season.

And while the club hoped Galvis and Crawford — and arguably even Scott Kingery — would become the next cornerstone at the shortstop position from within their own farm system — ultimately, the club pursued outside means on Monday, when they dealt for Jean Segura from the Seattle Mariners. 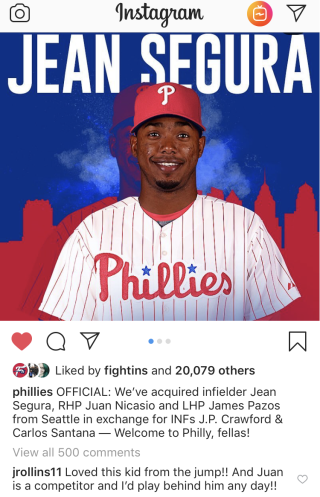 Rollins had nothing but praise for Segura and Nicasio on Instagram saying he has loved Segura "from the jump," and that Nicasio is a "competitor" and he would "play behind him any day."

The acquisitions off Segura, Nicasio and Pazos will surely be the first of many for general manager Matt Klentak this offseason.