Eagles Flyers Phillies Sixers Union About Us Write For Us
Flyers Need Changes, and Fletcher Needs to Start Making Them
Mets in Contract Agreement With Former Phillies Catcher Wilson Ramos 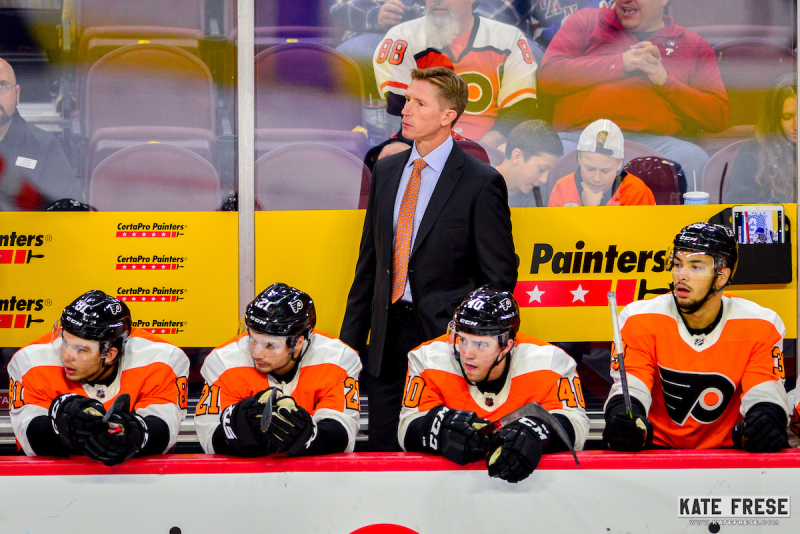 The next major change has apparently been made. Following a dismal road trip that included losses in the final four games, the Flyers will fire Dave Hakstol as head coach and hire Joel Quenneville, according to a report from Dave Isaac of the Courier Post. According to the report, the team is expected to officially announce the decision on Sunday night or Monday night.

It is not known if Quenneville would start his time behind the bench immediately for the Flyers next game on Tuesday or after the holiday break. If he waited, Phantoms head coach Scott Gordon would coach the next four games, according to the report.

Hakstol had coached the Flyers for the last three-plus seasons, including to a 12-15-4 record this season through 31 games. In 276 games coached, which ranks him fourth all-time in Flyers history, Hakstol had a 134-100-42 record. He also had a playoff record of 4-8.

Quenneville, 60, was recently fired by the Chicago Blackhawks after a 6-6-3 start to the season, marking the end of an era for Coach Q in Chicago. With the Blackhawks, Quenneville was behind the bench for three Stanley Cup titles, including one in 2010 against the Flyers, posting a 452-249-96 record in 797 games.

He then moved on to coach the Colorado Avalanche for three seasons from 2005 to 2008. In three seasons with the Avalanche, Quenneville had a 131-92-23 record and the team missed the playoffs in two of three seasons.

The Blackhawks made the playoffs in the first nine seasons with Quenneville as head coach, missing the playoffs for the first time last season. Quenneville coached just 15 games of the 2018-19 season before the decision was made by Chicago to relieve him of coaching duties.