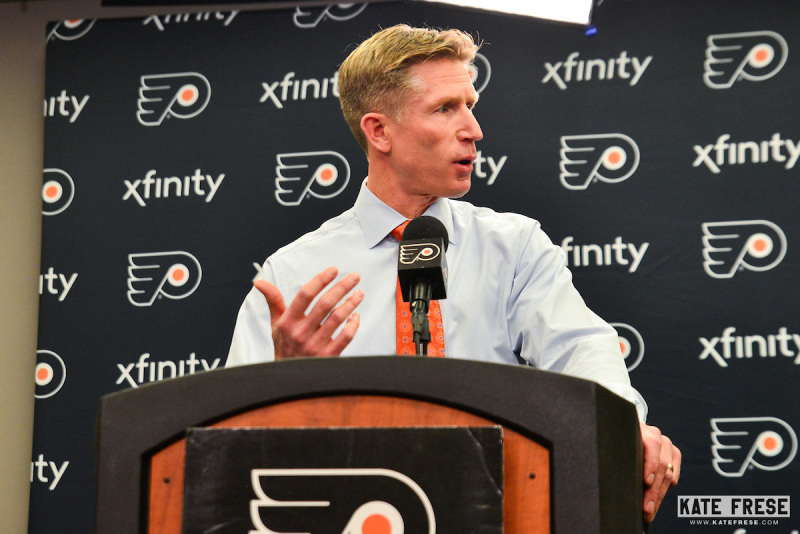 It seems that no one really has a grasp on what is going on with the Flyers coaching situation.

At around 4 p.m., with the team still up in the air on their flight home from Vancouver, a report from Dave Isaac of the Courier Post indicated that Dave Hakstol would be fired as head coach and that Joel Quenneville was going to be his replacement. In the report, it was noted that an official announcement was expected on Sunday night or Monday morning.

Since then, the reports have been denied by the team and by Quenneville.

Status quo in Philadelphia. No decision has been made on Dave Hakstol.

Dave Hakstol plans to still be coaching Monday. He just told the #Flyers’ PR staff he will give a medical update on Brian Elliott’s status on Monday. Stay tuned.

And most recently from David Pagnotta of The Fourth Period:

For what it’s worth, I got this response 15 mins ago from a Flyers exec regarding all the coaching hoopla: “Dave Hakstol is our head coach.”

So what do you make of this? Where do you even begin?

Something is definitely in the air in regards to change. Reports don't just surface out of nowhere. Usually, where there's smoke, there's fire.

That being said, for most of the afternoon as all of this started, the team was on a plane that landed at around 6:15 p.m. Obviously, the team wasn't going to make any announcement while the flight was in the air. In the hour or so since it has landed, the team is probably getting situated on the ground, which again, means the team won't announce anything.

In Quenneville's case, whether he's been contacted about the job, offered the job or accepted the job, he's not going to say anything. He was just in this spot a month and a half ago, being fired by Chicago, and wouldn't speak on any new job without the team officially announcing it.

Of course, the longer the Flyers carry this out, should a change actually be made, this will only add more unrest to a fan base that was ready to pop champagne and toast to new beginnings a few hours earlier. If the fan base is in need of a move like this to draw interest, since their ire toward Hakstol hasn't changed a bit since Chuck Fletcher's hiring, then you can't toy with the people who pay hard-earned money to watch the team and support it.

It takes a decision that many are anticipating and expecting and turns it into more of a circus than it needs to be.

It remains unclear whether an official update will come on Sunday night or Monday morning or at all before Wednesday's roster freeze, but all eyes are on the organization now for some clarification as to what the deal really is and what is really going to happen.