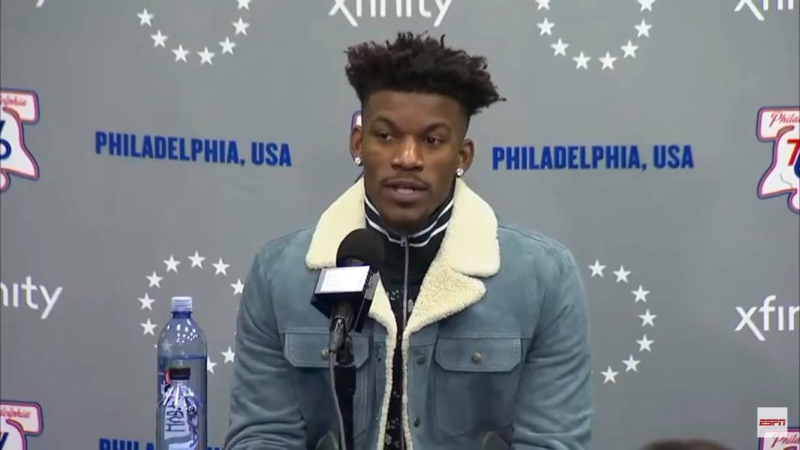 The Philadelphia 76ers have posted a 3-1 record over the first four games of their tough, 12-game stretch. They've won the last two without the services of Jimmy Butler, who has been dealing with a sprained right wrist. Before the Sixers' win against the Spurs, Brett Brown alluded to Butler playing during the team's next game in Denver. That doesn't seem to be the case now.

According to Shams Charania of The Athletic, Butler will visit a specialist for his wrist injury on Friday in Los Angeles. Still, the team doesn't seem too concerned about the severity.

Butler will be with the 76ers in Denver and is doubtful for Saturday's game against the Nuggets, league sources said. Both sides are optimistic he will play during 76ers' four-game road trip. https://t.co/dCLyKFCK0B

Tom Moore of the Bucks County Courier Times reports that the team is just trying to get further confirmation that things are okay with Butler.

Butler, 29, injured his wrist during the Sixers' two-point loss to the Thunder on January 29. In 28 games with Philadelphia, he's averaging 19 points on 47.5 percent shooting and 38.6 percent from beyond the arc.

Jimmy isn't the only guy in line to miss Saturday's game in Denver. Joel Embiid and Wilson Chandler are officially out. Embiid, recently selected as an All-Star starter for the second straight year, will rest on Saturday. He's been dealing with back tightness for a while now and sitting will give him five days between games.

As for Chandler, he is out with left hamstring tightness. The severity of this is unknown, but it's definitely worth keeping an eye on since Chandler missed the team's first nine games with a hamstring injury.

With these injuries, you're looking at starting lineup that includes Ben Simmons, JJ Redick, Corey Brewer, Furkan Korkmaz and Jonah Bolden. The Sixers will likely want to keep Landry Shamet in a bench role behind Redick. Amir Johnson could start ahead of Bolden, too, if Brett Brown prefers to have Jonah come off the bench rather than start.

Quick non-update on Markelle Fultz. The former first overall pick will be traveling with the team during their road trip, but he's still limited to physical therapy. Brett Brown doesn't expect Fultz to be cleared for basketball activities during the four-game stretch on the road.