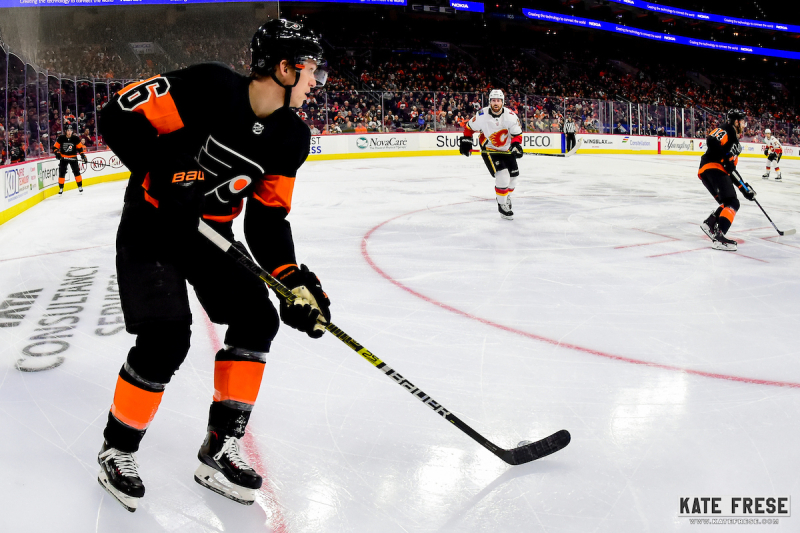 The Flyers entered the later stages of Saturday's game against the Calgary Flames with their sights set on snapping a losing streak. With just over four minutes left, they surrendered the tying goal, setting up overtime.

Overtime has not been kind to the Flyers this season, and that run continued as T.J. Brodie scored at 1:59 of overtime to hand the Flyers their sixth straight loss, 3-2, on Saturday afternoon at Wells Fargo Center.

The Flyers got on the board first, striking on their first power play of the game. Travis Sanheim entered the zone and attempted a centering pass that hit off the skate of Brodie and went in to make it 1-0 at 12:10.

The Flyers failed to score on a power play late in the period, but applied some good pressure, holding a 14-11 lead in shots after 20 minutes.

The Flyers had two more power play chances in the second and continued to apply solid pressure, but could not score.

The Flames managed to get on the board, converting on a nice rush. Johnny Gaudreau and Sean Monahan perfectly executed a give-and-go with Monahan setting up Gaudreau for a one-timer that beat Carter Hart from the right circle to tie the game.

The Flyers got another lucky break in the third as David Rittich came out of the net to play the puck and turned it over to Travis Konecny. Konecny threw a shot on goal that went through the legs of Rittich and found the net to give the Flyers the lead at 5:57.

The Flyers held the one goal lead into the final five minutes of regulation before the Flames were allowed a clean zone entry in transition. That allowed Sam Bennett to get a pass into the slot for Matthew Tkachuk, and he let go of a quick shot and beat Hart to tie the game.

In the overtime, a turnover on a bad pass by Jordan Weal sent the Flames back on a two-on-one. Tkachuk set up Brodie for the one-touch game-winning goal, sending the Flyers to another loss, their sixth straight and sixth in overtime this season.

The Flyers are back on the ice on Monday, as they host the St. Louis Blues at 7 p.m.