Eagles Flyers Phillies Sixers About Us Write For Us
Sixers To Honor Marc Zumoff on 25 Years as Team's Broadcaster
Sixers to Retire Moses Malone's No. 2 Jersey 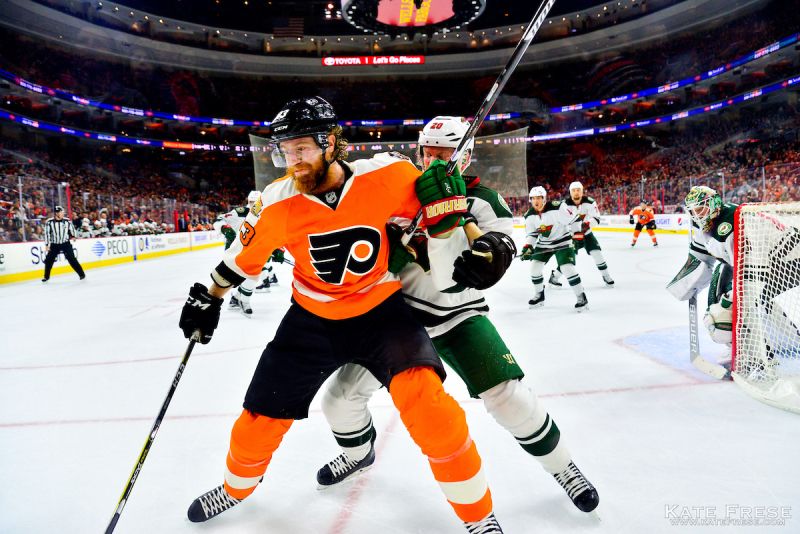 The Flyers snapped an eight-game losing streak on Thursday and returned right back to the loss column on Saturday in New Jersey, falling 3-2. But don't be fooled by the score. The Flyers really were not very involved in the game and a meaningless goal with two seconds left made the final score appear much closer.

The Minnesota Wild have been clinging to a playoff spot among a mass of Western Conference teams that are hovering around the wildcard. They are the Flyers next opponent as the season continues on.

The late goal on Saturday gave Sean Couturier his first goal in five games. He also has five points in his last three games. For a team that has struggled offensively, Couturier has been providing a lot of the offense of late.
Zach Parise has not scored a goal in four games, but prior to that, he had four goals and nine points in his previous five games. As a longtime foe of the Flyers from his days in New Jersey, Parise seems to come up with a big goal or play against the Flyers always.

Carter Hart's last game was decent, making 23 saves in a loss in New Jersey. Hart was tested early and often and the goals were more on the team in front of him than the goalie himself, but he continues to be poised and keep games close.

Devan Dubnyk had a four-game winning streak snapped in a bad loss to Detroit on Saturday, allowing five goals on 37 shots. His four wins before that start including a 38-save win over Toronto in a 4-3 decision and a 32-save shutout against Montreal.

Andrew MacDonald likely slots back into the lineup after missing some time with an injury. Christian Folin comes out.