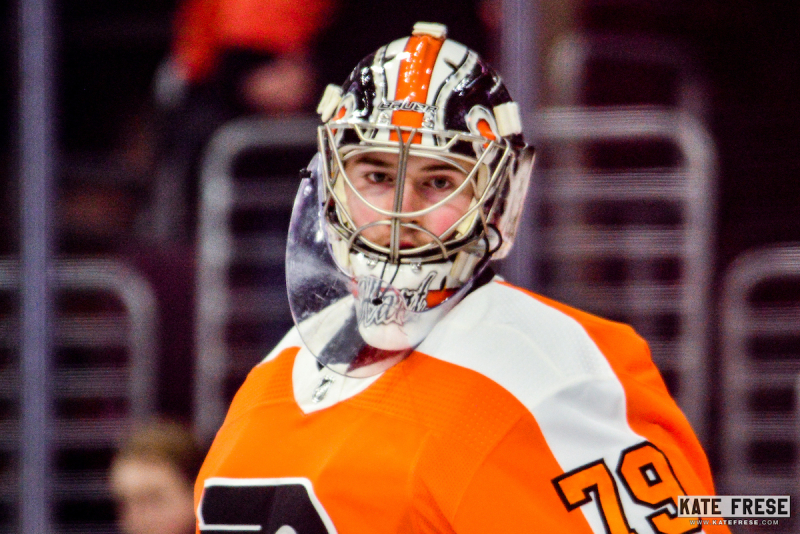 The Flyers picked right back up where they left off before the break on Monday night. Carter Hart was steady in goal. Travis Konecny and James van Riemsdyk continued their recent hot streaks and the Flyers got a solid all-around performance.

It led to their fourth straight win, a 3-1 victory over the Winnipeg Jets at Wells Fargo Center.

The first period was sloppy for both sides with several missed passes and turnovers. Both teams also had power play chances late in the period.

The Flyers failed to get set up on their opportunity. In the final 1:04, the Jets went to work, but Hart came up with two impressive saves on Mark Scheifele and Patrik Laine to keep the game scoreless through 20 minutes.

After the first period, shots were 11-8 Winnipeg.

The Flyers killed off the remainder of a Winnipeg power play to open the second. As the game neared the halfway point, the Flyers struck for the first goal.

Mikhail Vorobyev led a rush up ice and set up Christian Folin at the blue line. Folin fired a shot from the point that hit Michael Raffl on the way in. The shot was stopped by Laurent Brossoit, but left a rebound in the crease for Phil Varone, who scored to put the Flyers up 1-0 with his second goal of the season.

The Jets were back on the power play moments later and the Flyers did a solid job killing it off until the final seconds when the Jets got the bounce they needed. A point shot by Jacob Trouba was tipped by Jack Roslovic and skipped off the ice and up over Hart to tie the game at one at 12:59.

Late in the period, the Flyers got the lead back with a deflection of their own. Andrew MacDonald fired a shot from the blue line that Konecny was able to deflect high over Brossoit for the goal with 1:14 remaining in the period.

With six seconds left in the period, the Flyers went to their second power play of the game and carried over 1:54 to the third period. Shots through two periods were 23-20 Jets.

The Flyers kept the pressure on early in the third before Winnipeg pushed back. Hart remained solid through, keeping the margin at one.

The Flyers padded the lead with a late insurance goal off a Winnipeg turnover. van Riemsdyk stole the puck and passed over to Konecny. Konecny held the puck while van Riemsdyk went to the net and dished it back for a tap-in goal to make it 3-1 with 3:35 remaining.

The Flyers held on from there, finishing off their fourth straight win.

Shayne Gostisbehere was a late scratch, leaving during warmups with a lower-body injury. Folin took his place in the lineup.

The Flyers get right back on the ice on Tuesday night on the road against the New York Rangers. Game time is 7:30 p.m.