Eagles Flyers Phillies Sixers About Us Write For Us
Phillies Invite 11 Minor League Players to Spring Training
Preview: The Eagles Divisional Round Playoff Match-up With The Saints

Bryce Harper appears destined to don red pinstripes for 2019 and beyond.

Just hours before the Philadelphia Phillies' meeting with the perennial All-Star slugger and his agent, Scott Boras, first baseman Rhys Hoskins may have provided the final clue to let fans know that what they have been hoping for all offseason will become a reality.

Hoskins liked two following two tweets, both of which contain references to tomorrow's meeting in Las Vegas and the prospects of a contract signing to occur:

How do we feel about a potential 12-year, $350 million deal for Bryce Harper, #Phillies fans? pic.twitter.com/NpZ3IP5EwX

And just in case Hoskins decides to "unlike" the tweets, here is a screenshot for posterity. 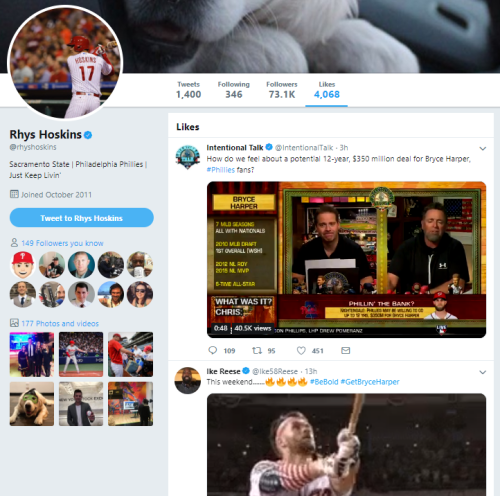 Remember this moment, Phillies fans. It could be happening, and soon.