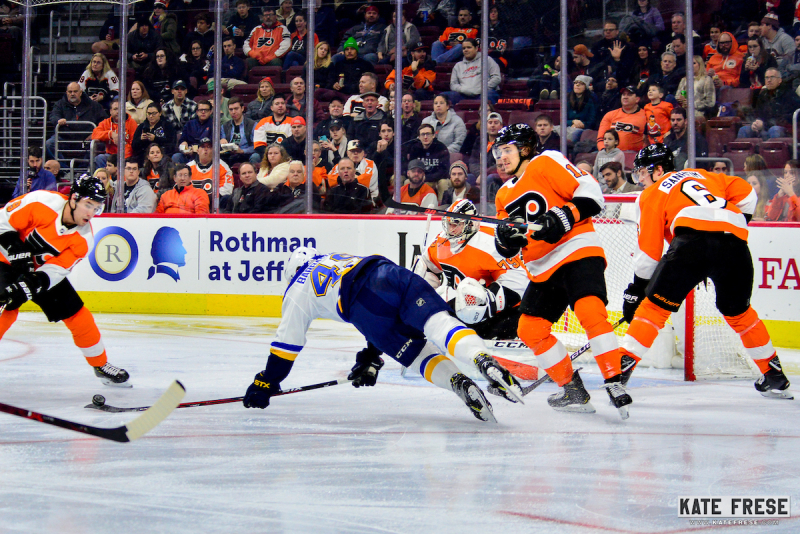 With an 0-5-2 record since the league-mandated Christmas break and a 30th-place spot in the standings right now, it's safe to say things are particularly dreadful for the Flyers.

Players are frustrated, fans are incensed and the team just appears to be in a cataclysmic free-fall. In a season that has already seen the Orange and Black fire a general manager, a head coach and flirt with utilizing a league-record number of goalies, things don't seem to be on the up-and-up.

That frustration appears to have made its way up to the broadcast booth, or at the very least, has been picked up by the (active) microphones in it. After taking the ice against the Blues on Monday -- ultimately a 3-0 loss -- NBC Sports Philadelphia's Jim Jackson and Keith Jones were overheard with some sharp criticisms of the team they're tasked with watching.

Here's the Jim Jackson & Keith Jones conversation about the team, Weise and Voracek in best possible quality. (It's still not great) #Flyers pic.twitter.com/zo0pqQHFsC

The audio, while not great, is decipherable enough to hear Jackson calling on the team to recall Nicolas Aube-Kubel from AHL Lehigh Valley, as "something" they should do.

Jones is also heard as saying that Dale Weise "has got to go," and that when Jakub Voracek isn't getting time on the ice, "he checks out."

Jones then proceeds to be a bit more profane, calling the Flyers' recent stretch "as f---ing bad as it gets," with Jackson harkening back to a 6-0 loss to Toronto on Nov. 24. "You've got a rookie in net, but you can't do anything against him," adds Jones, referencing a 25-save shutout effort for the Blues' Jordan Binnington in his first NHL start.

On the surface, this isn't exactly the biggest deal, but it doesn't do anybody any favors. Hockey broadcasters are caught with hot microphones on a semi-regular basis. Over a career's worth of 82-game seasons and playoff games, there's a lot that's left to be said.

While Jackson and Jones are consummate professionals and do a strong job even when tasked with watching a rough club, these guys are still human at the end of the day, and have opinions about what they're watching just as fans do. You'll likely hear a lot worse in broadcast booths across the NHL on a nightly basis -- Jackson and Jones just committed the simple offense of being caught.

Then again, it's still kind of a ridiculous way to get caught. One of the cardinal rules in broadcasting is to treat each microphone as if it's active, and exercise best discretion. Anyone caught saying something potentially embarrassing into a hot mic essentially has it coming.

Just about anything that can go wrong has been going wrong for the Flyers this season, and this is the latest example.

U can't argue with anything said. We suck ass this year!!!

Just like politics, speak the truth and you are shamed

Embarrassing? I don't see a problem with anything they said, except maybe the use of the F-bomb but they spoke the truth, and spoke facts. This team is bad right now (and is a much better team than what is currently on display) and getting worse with nothing being done about it. Everyone should be mad! They just spoke the truth in a conversation with each other, nothing wrong with that.

Every thing they said was absolutely right. From bringing up great potential from the ahl to trimming the fat with dale weise. And it's about time someone said something about borachek. He's a puck hog that doesn't produce anything besides turn overs and getting cornered by defenseman. Hopefully Hart just takes this as a learning year and rides this out

Sometimes, the truth sucks - but that doesn't change the truth.

If you ever notice Keith Jones cannot speak without saying “yeah” in the beginning.