Embed from Getty Images
By Matt Albertson, Historical Columnist
On Thursday, New Era announced in a tweet that the Phillies have added the popular 1970-1991 maroon Phillies cap as a second alternate cap, suggesting the club will use the cap and a corresponding uniform more regularly in 2019. The club wore the cap along with 1983 powder blue road uniforms at select Thursday night home games in 2018. Last season, the maroon caps did not have the official MLB batter logo on the back of the cap whereas those worn in 2019 will have that logo. 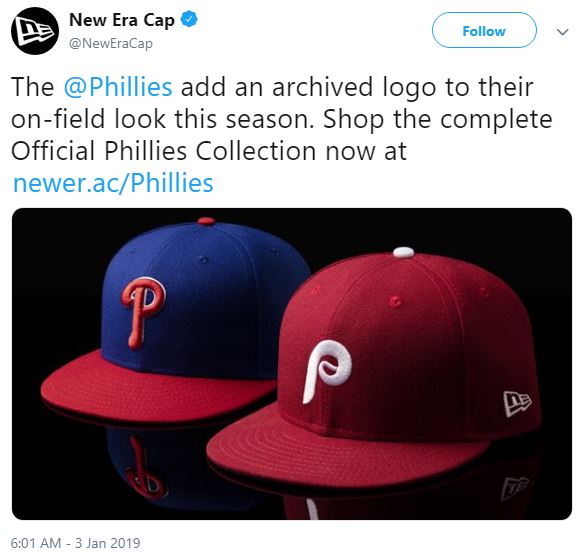 Why the logo was absent from the maroon caps last season is not clear. Chris Creamer of sportslogos.net suggested that the logo's absence was because the cap was not part of the official uniform rotation like the standard red cap and alternate blue cap modeled on the 1948 uniforms. No mention is made in the MLB rule book that the logo is required for league play. It's possible that the absent logo was simply an oversight. It's unknown whether or not this logo was present on all other "Turn Back the Clock" editions from previous years. For example, the 1960s retro uniforms worn against the Cardinals on June 19 and 21, 2015 included the logo. The 1915 retro caps worn in 2015 were sold with the logo on the back, while the 2016 pillbox cap worn with 1976 retro uniforms was sold without the logo. It seems uniformity for "Turn Back the Clock" caps was not a priority.
Embed from Getty Images

The entire Phillies regular season wardrobe, except the current away uniform and specialty uniforms worn for Memorial Day, Independence Day, Mother's Day, Fathers Day, and St. Patrick's Day, are all retro in some degree. The standard home uniform was first worn by the club in 1950 and retired in 1970. The Sunday home alternate is a throwback to the 1948 home uniforms and is, in my humble opinion, the best of the lot. It will be interesting to see if the Phillies elect to sport a generic 1970-1991 uniform or if they will again select a particular year to model, and if it will be a home or away uniform…BOTH! I will write a followup article when the club announces their plans and critique the degree to accuracy which the reproductions are to their archived originals.