Following last week's announcement of an expansion team coming to Columbus, Ohio, the now six-team Arena Football League announced on Wednesday its schedule and rule changes for the 2019 season.

The Philadelphia Soul — seeking their fourth title in 14 seasons — will begin their 12-game, 13-week slate at home on Saturday, April 27, against the league's other expansion franchise, Atlantic City. The Soul will play a three-game homestand beginning on June 1 against Columbus; they will face the defending ArenaBowl champion Washington Valor on Saturday, May 18 (Week 4) and Sunday, June 9 (Week 7). The Soul will have their bye in Week 12 of mid-July. 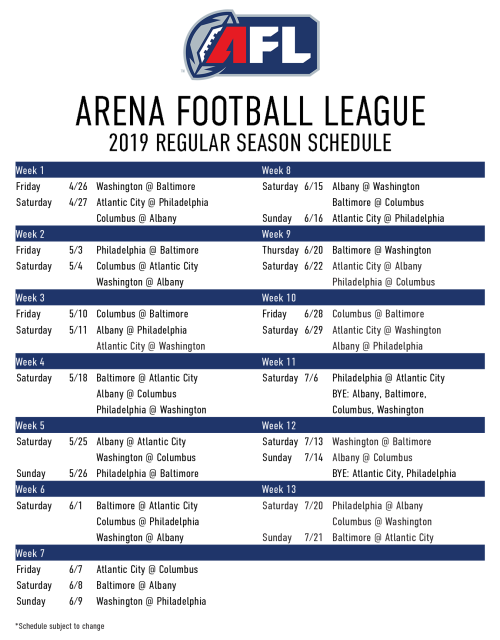 The league is also implementing several rule changes as it looks to shorten games. improve players’ safety and enhance fan experience. The following rule changes were announced for second and fourth-quarter timing rules, media and coaches' timeouts, and timing after extra-point kicks:

“AFL football is the most exciting, high-scoring, innovative brand of football and we’re looking forward to bringing it to even more fans this season,” said Randall Boe, Commissioner of the AFL. “The rule changes will make the AFL game more thrilling and engaging as they speed play up, making the game last closer to two hours—which we think is the optimal amount of time.”

While the league announced some changes to the game, it will follow the same postseason format introduced in 2018:

The postseason will follow the same format as the 2018 postseason, with the top four teams qualifying for the playoffs. There will be a pair of home-and-home series between the opponents in the first round of the playoffs. The two teams with the highest aggregate score following these games will advance to ArenaBowl XXXII, to be played in the second weekend of August. The ArenaBowl game is played as a traditional single-event game, with the winner being crowned the World Champions of Arena Football.

The Soul are offering season ticket memberships and include some of the following benefits for a limited time: concession gift cards, exclusive merchandise, complimentary parking, and field passes. The team’s promotional and theme night schedule will be announced in the coming weeks, as will on-sale dates for single-game tickets. For more information, call 888-789-7685, or visit www.PhiladelphiaSoul.com.