Flyers Rally to Force OT, But Fall in Shootout 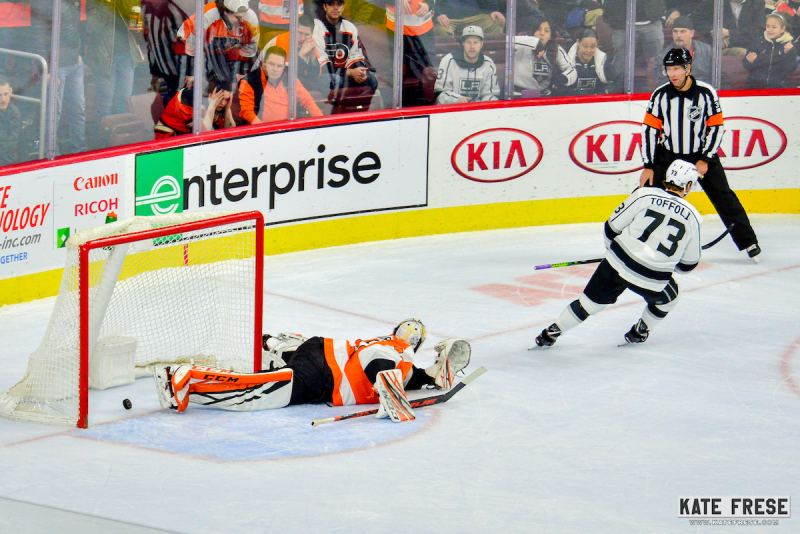 For a few seconds, the Flyers were riding high on a nine-game winning streak, until replay showed that the game would continue. A shootout attempt by Adrian Kempe that was ruled to have hit the post actually went in under the crossbar, resulting in a goal that prolonged the skills competition.

The teams played three more rounds before Tyler Toffoli scored to end the Flyers winning streak at eight games in a 3-2 shootout loss to the Los Angeles Kings on Thursday night at Wells Fargo Center.

The Flyers got off to a solid start with good possession, but that quickly slipped away and the Kings took over.

The Kings scored the first goal of the game on a defensive breakdown, as Austin Wagner was able to get open in the slot, walk in a rip a shot high over Anthony Stolarz for the game's first goal at 8:46.

Wagner and Kyle Clifford each had breakaways in the first period and failed to score. Wagner was stopped by Stolarz. Clifford hit the post.

The Kings continued to control the early part of the second period before the Flyers finally got on the board at the seven-minute mark. Claude Giroux made a nice diving play to chop the puck ahead into the slot. Sean Couturier was there to receive the pass and backhand through the legs of Jonathan Quick to tie the game at one with his 22nd goal of the season.

The Flyers started to carry the momentum from there until a bad line change gave the Kings a scoring chance. The Kings moved up on a two-on-one and Brendan Leipsic put a perfect saucer pass on the tape to Kempe for the one-timer to beat Stolarz and regain the lead.

The Flyers got the game's first power play with 1:25 left in the second. At the horn, they nearly tied the game as a quick set-up allowed Couturier to fire a one-timer into the net, but it came after time had run out, so the Flyers headed to the third period trailing by a goal. After 40 minutes, shots were 31-20 Kings.

The Flyers failed to score on that power play and another one early in the period. The game wore on with the Flyers not really getting much on Quick. Finally, with the goalie pulled in the final minute, the Flyers tied the game. Giroux made a great cross-ice pass to set up Jake Voracek, who fired high over Quick to tie the game with 17.6 seconds left.

In overtime, both teams had chances to end it. Travis Konecny hit the post on a two-on-one. Stolarz made two great saves in the final minute to force the shootout.

In the shootout, the Flyers got goals from Giroux and Nolan Patrick. The Kings kept pace with a goal by Ilya Kovalchuk and tied it on the third-round attempt by Kempe. Finally, Toffoli's goal proved to be the deciding factor.

The Flyers are back in action on Saturday as they host the Anaheim Ducks at 1 p.m.