How Will the Flyers Approach the Trade Deadline? 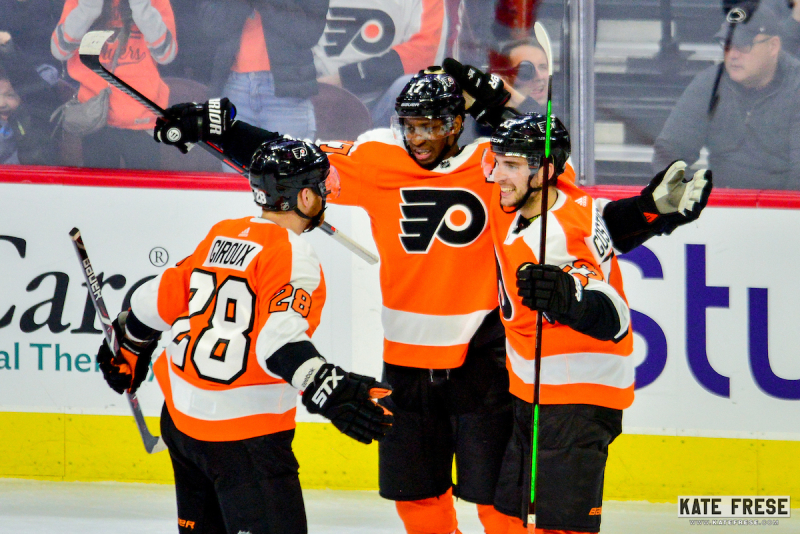 With under three weeks until the NHL Trade Deadline, the Philadelphia Flyers are still in the position to be sellers despite their impressive play as of late. The Flyers have won eight in a row and are currently sitting just five points out of a playoff spot, which is much better than where they were at the bottom of the NHL just a month ago.

The team is not necessarily looking for any rentals; however, it is possible to see Philadelphia trade future picks, or prospects to another team with term. Some trades might include depth players such as Michael Raffl or Radko Gudas but the most realistic and logical trade is for the Flyers to trade Wayne Simmonds by the time the deadline approaches on Feb. 25.

The top teams that may acquire Simmonds, who not only need his talents but can afford him as well, include the Tampa Bay Lightning ($1.71 million), Nashville Predators ($7.10 million), Winnipeg Jets ($5.68 million), and the Boston Bruins ($4.21 million). To find a team who wants him would require that this also be a team that would be willing to sign him long-term at considerable money, as he is a UFA.

Now although the Lightning don’t have the most amount of cap space, it has been stated by TSN’s Darren Dreger on TSN Radio 690 Montreal that it’s “not going to be easy. But I think even the best teams and their general managers are looking for areas that they can deepen or improve on. So I’d say yes in answer to your question.

"I don’t think that they have any glaring needs, and obviously they’ve got cap to worry about. So what are they willing to part with player-wise to bring in what might be perceived as an upgrade. Believe it or not, I think Tampa Bay has inquired on Wayne Simmonds and on Micheal Ferland. I can see both of those players -- you can’t get them both, but if Tampa Bay were able to find a way to add one of those pieces, that would be a nice little add for them. Little bit more bite in their lineup. Both of those guys can comfortably play in your top-six or worst case top-nine. But to have a player like that, a power forward who can play throughout your lineup up and down, would be a premium type of asset."

In order for this trade to work, Tampa Bay would need to send someone like Ryan Callahan, who has a 5.8 million cap hit.

The Predators could be an even better fit because of their need of depth along with how much cap space they have. No matter which team trades for Simmonds they will at least have to pay a steep price, possibly a first-round pick, a prospect, and potentially another pick. Current roster players like Viktor Arvidsson, Kevin Fiala, Ryan Hartman and Colton Sissons are way too valuable and most likely untouchable in any trade even for a player such as Simmonds.

Another hypothetical trade could include a second or a third round pick, and a top-six defenseman, but again it might be hard to trade for a good defenseman because of Simmonds’ contract. Both the Bolts and Preds are very strong teams who would want him as insurance.

If a long-term injury occurs prior to the deadline, then that would change everything. Over the years, teams have bulked up their team in preparation of injuries, bad play, etc.

All of this might not even occur if the Flyers continue to make a run for the Stanley Cup Playoffs. GM Chuck Fletcher may decide that Simmonds is more valuable to keep him for the rest of the year even if that means they may lose him in the offseason, despite saying that he would make a decision on Simmonds by the deadline. That would be one tough pill to swallow similar to a New York Islanders situation during last year in letting John Tavares walk free instead of trading him for at least something.

No matter what Fletcher decides to do, this Flyers team will look at least a little different by the time 3 p.m. on Feb. 25 arrives.