Eagles Flyers Phillies Sixers About Us Write For Us
Previous month:
January 2019
Next month:
March 2019 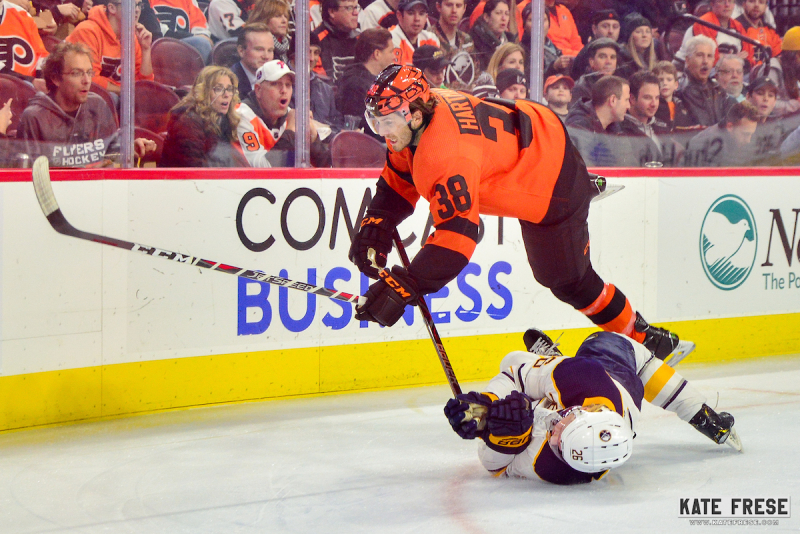 It took a late-game, frantic comeback for the Flyers to get back into the win column on Saturday. On Tuesday, they picked up a win to move above a team in the standings and did it rather convincingly.

For a change, the Flyers got off to a quick start and never looked back, leading nearly wire to wire in a 5-2 victory over the Buffalo Sabres that, for now, improved their playoff hopes slightly. 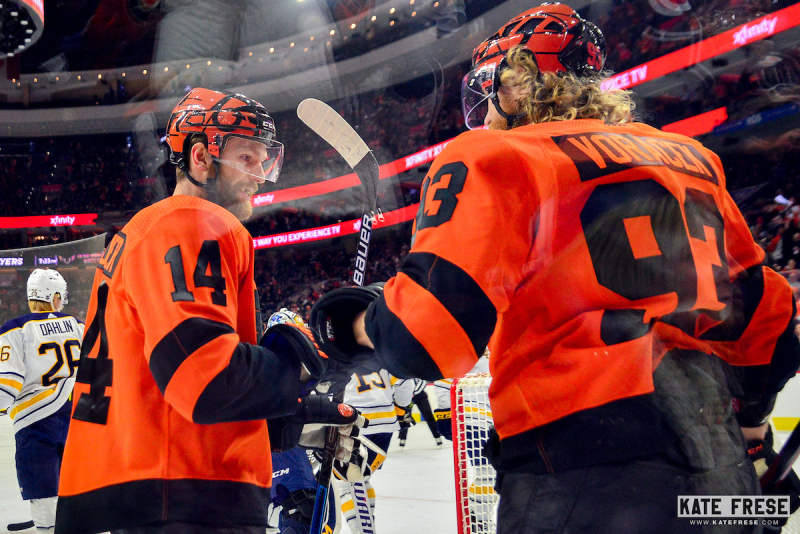 It was a range of emotions for the Flyers in the last several hours, from the jubilation of a dramatic win in the Stadium Series on Saturday to bidding farewell to a longtime teammate on Monday.

On Tuesday night at Wells Fargo Center, no comeback was needed. A hot start paced the Flyers to a 5-2 win over the Buffalo Sabres. 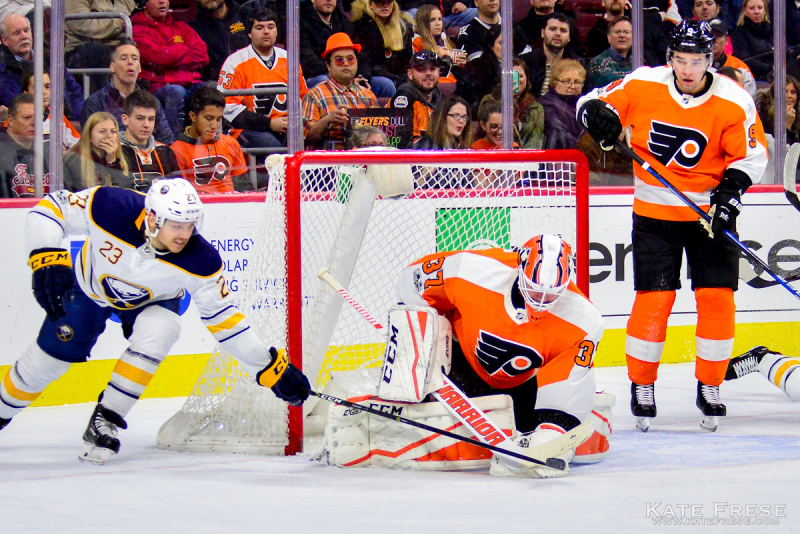 Monday's trade deadline came and went without much change for the Flyers. The one roster move made was a significant one, with Wayne Simmonds heading to Nashville in a trade that returned forward Ryan Hartman and a conditional fourth-round pick in 2020.

The rest of the Flyers move forward with the remainder of the season, trying to continue the playoff push. They can leapfrog one team ahead of them in the standings on Tuesday night, as they face the Buffalo Sabres.

The Phillies are waiting out the Bryce Harper drama.  Phillies general manager Matt Klentak openly spoke of "potential free agents" that the Phillies could pursue later if they do not add a key free agent now.  Well if that is going to be the case, subtract Nolan Arenado off of that list.

Around the NHL: Wheeling and Dealing on Deadline Day

Unless you either hate hockey or were in a coma for the last week, you’ll know the NHL Trade Deadline came and went on Monday. Here’s a look at all the trades that went down on the big day -- and the week leading up to it -- that will shape the balance of power around the NHL heading into the playoffs...and beyond.

Continue reading "Around the NHL: Wheeling and Dealing on Deadline Day" »

Wayne Simmonds was a Perfect Representative for Flyers 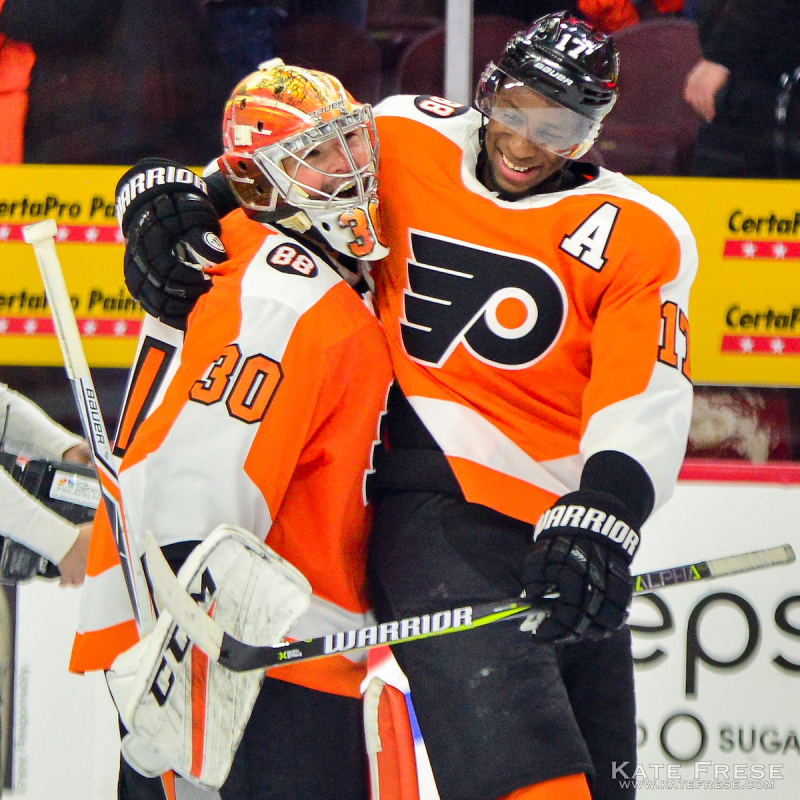 It’s no secret, but when you just look at how he plays, right wing Wayne Simmonds is the true definition of being a Philadelphia Flyer. He was a full-on offensive threat, both during even strength and on the power play.

In 584 games played for the Flyers, Simmonds had collected 203 goals and 175 assists for 378 total points, including 91 goals and 60 assists on the power play. Simmonds played in nearly every game each season even when he was plagued with injuries.

With Simmonds now gone, we take a look back at the timeline of “Simmer’s” career as a member of the Orange and Black.

Continue reading "Wayne Simmonds was a Perfect Representative for Flyers " »

While Phillies fans had their attention directed toward another outfielder that they hope will join the team soon, the team received a development on one of their outfielders in camp.

Last Wednesday, Odúbel Herrera suffered a hamstring sprain that was said to be minor. The expectation was that it would take a few days and not prevent Odúbel from progressing normally. On Monday, Jim Salusbury of NBC Sports Philly reported that the sprain is worse than initially thought.

Most of the day, it was the waiting game for the Flyers. Wayne Simmonds did not practice, everyone else did. But there was a tension to the day for more players than Simmonds.

There was a report that teams were kicking the tires on Radko Gudas. Michael Raffl almost sounded like he knew he was going to be on the way out. And Simmonds was near the top of the list on the NHL’s board for most of the day.

Finally, shortly after the 3 p.m. deadline, the news came in. Wayne Simmonds was a Nashville Predator.

For most of the afternoon, there was no news. Finally, right as the deadline hit, the Flyers made their move.

The Flyers traded forward Wayne Simmonds to the Nashville Predators in exchange for forward Ryan Hartman and a conditional fourth-round pick in 2020. The pick becomes a third-round pick if Nashville wins a playoff series this season.

Friday night we learned that the plane belonging to Philadelphia Phillies owner John Middleton was on the ground in Las Vegas, home to free agent outfielder Bryce Harper.  And, there was "optimism" that the Phillies and Harper were getting closer to a deal.  Those up at 3:00 a.m. last night as the wind howled in the Delaware Valley found out there was some new competition.

Jesse Sanchez of MLB.com reports that the Los Angeles Dodgers visit to Harper in Las Vegas:

A source has told MLB.com's Jesse Sanchez that the Dodgers are back in play for free-agent superstar Bryce Harper. The development throws another twist into the chase for Harper, which had appeared to be down to the Phillies, Giants, White Sox and Nationals, though Philadelphia had appeared to be the heavy favorite to sign the outfielder.

This said "had" in the past tense.  Does this mean that the Dodgers are all-in?

Also Sunday night, we learned that the San Francisco Giants may have made a long-term deal for Harper:

#sfgiants have made at least one offer. I believe it to be long term. https://t.co/NPD2tPeoWO

Previous reports suggested that the Giants were only willing to go short-term. It is unclear the level of the interest the Dodgers have at the moment.  After signing A.J. Pollock, the Dodgers appeared to be out.  The Dodgers, right up against the luxury tax threshold, would have a real cost of a Harper deal much greater than it would appear, once penalties are factored in.  After falling short in the World Series two years in a row, might the Dodgers be willing to go for broke?

The Dodgers recently learned that pitcher Clayton Kershaw had a setback with his shoulder inflammation.  The Dodgers could be worried that their one-time ace will cost the club some wins with an injury and might be setting their sites elsewhere, despite claims Kershaw will be ready for Opening Day.  But again, the cost would be high to add Harper to their offense.

Of course, engaging in conversations with other teams could drive up the price for the Phillies.  Even if teams are not willing to go 10 years with Harper, offering a higher average annual value to Harper could bring Harper's total compensation up with the Phillies.  Harper's agent Scott Boras reportedly is looking for a 10-year deal and one that beats the $325 mark that Giancarlo Stanton received from the Miami Marlins in 2014.