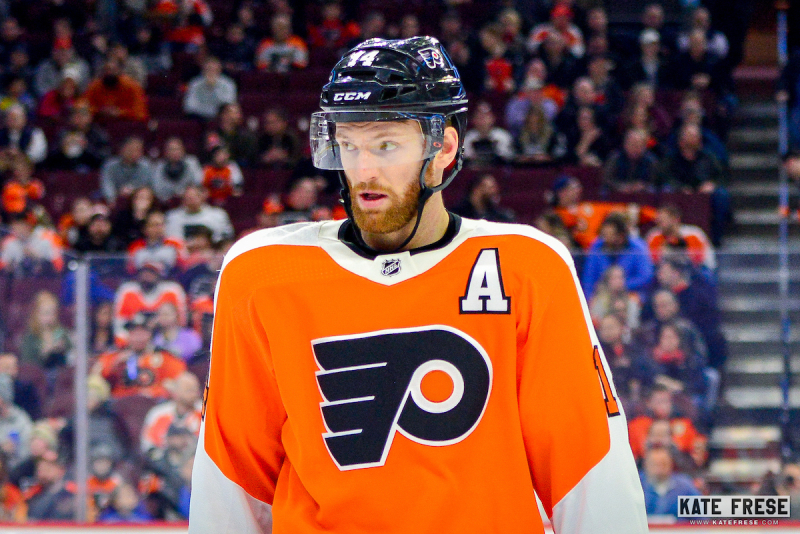 It’s so hard to predict the future of a 17 or 18-year-old prospect when they get drafted into the NHL, and really get an idea of how well they will perform throughout their career. Some players make it to the NHL right away and play exceptionally well. For others it takes time to develop and find their game.

This is how Sean Couturier’s career began back in 2011-12, as a quiet role as a top-nine defensive shutdown forward on the Flyers. Over the last two seasons, Couturier has blossomed into splitting time between the top-line and second-line center role while producing some remarkable numbers.  Last season, the 26-year-old set career-high marks with 31 goals, 45 assists and 76 points. This season, Couturier has 23 goals and 48 points in 53 games played.

He has certainly come a long way since his rookie year, and now has progressed into an elite top-six center. Couturier is also producing at a rate that not many thought he would. When his career began, he was known for stepping into the defensive role and shutting down the likes of Evgeni Malkin of the Pittsburgh Penguins during the 2012 Stanley Cup Playoffs. He’s become the full package for Philadelphia and is slowly starting to get league wide recognition.

He could have probably been named an All-Star this season if not for a slow start that was due to recovery from major knee injuries suffered in the playoffs last season. He was a Selke Trophy finalist last year, but came up short in the voting to the eventual winner Anze Kopitar.

“I think it’s a tremendous honor. It’s nice to be recognized," Couturier said of the nomination. "You don’t necessarily play for the personal trophy and awards but it’s nice to be recognized by others, the way you play. Especially being nominated with [Patrice] Bergeron and Kopitar, they’re two guys I kind of modeled my game after coming into the league and it’s already just a great honor to be nominated with them."

The Phoenix, AZ native put up better numbers last year than Bergeron, one of the best two-way forwards in the league, validated by his four Selke Trophy wins. Bergeron has two more points in 14 less games played than Couturier this season. Bergeron has posted at least 50 points in every season except one since 2010.

One of the other top two-way forwards in the league, Kopitar had a remarkable year with 35 goals and 92 points while playing in all 82 games last season. This year, the Los Angeles Kings captain has 17 goals and 24 assists for 41 points in 54 games played. Kopitar has scored 40 or more points in every season since he entered the league in 2006-07.

Although he really only entered the discussion as a Selke finalist last season and isn't a regular there yet, you can certainly argue that Couturier can stick with these great defensive players. His defensive skills certainly put him towards the top as one of the best two way players in the entire NHL. His offensive skills and production are working towards those numbers that both Bergeron and Kopitar are capable of as well. Excluding his first two seasons with the Orange and Black, Couturier has scored 34 or more points in each season.

When Couturier wasn’t putting up the offensive numbers like most hoped he would, fans began to get restless and started arguing for him to be traded, specifically for then star player Bobby Ryan. Fortunately for the Flyers, they never made the deal which is turning out to be all the better because his play has skyrocketed while Ryan’s production has dropped dramatically over the past few years. With only 33 points this year in 52 games played, the 31 year-old hasn’t scored over 40 points since 2015-16 when he scored 56 points in what was his third season with the Ottawa Senators.

Couturier’s defensive play that has been particularly sharp is his ability to control the puck, especially against the boards. The last three years, Couturier has consistently been 52 percent or better in the face-off circle. One final aspect of Couturier’s game that has shaped into an unexpected but great characteristic is that he has become a true leader for the Flyers as he was named one of the other assistant captains this season.

"I try to lead in any way I can," Couturier said after the Flyers first-round playoff loss in last year's matchup against the Penguins. "More by example, I should say. I'm not really the guy who's going to yell or talk often. I try to lead by example. Maybe show the new guys, I should say young guys, how the game should be played."

Regardless of how you view Couturier’s revamped playing style or his progression over the years, he has become and remains a valuable asset of the Flyers core.