Flyers May Have Another Late-Round Draft Gem in Kase 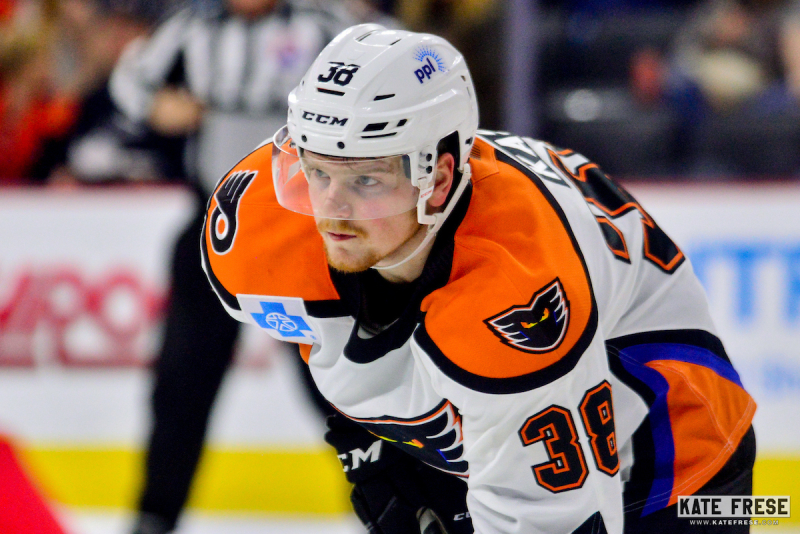 During the NHL Draft, the later into the rounds, the harder it is to find the talent. However, the Philadelphia Flyers are one of the better teams to find young talent especially outside of North America.

Kase is currently with the Lehigh Valley Phantoms in his first pro season and showing promise already with 15 points in 23 games, scoring four goals and 11 assists. The 22 year-old Czech Republic native has much upside to his offensive game.

Before he was named the interim head coach for Philadelphia, Scott Gordon coached Kase and had some encouraging thoughts regarding his playing style.

“With [Nicolas Aube-Kubel] going up, you look at your roster, try to find out how you’re going to balance your lines and who’s going to fit well with who, and I think that [Greg Carey] and [Phil Varone], in the time that I’ve been with them, they’ve seemed to excel when they have some speed on their line — David brings that.”

“Whether it’s one month or if it’s two months from the start of the year, there’s a period where you’re going to have to get used to the smaller rink," Gordon said to the Courier Post earlier this season. "You’ve got to get used to the physical play and the speed of the game and the intelligence of the players and everything will come together and also you’ve got to learn probably a new system of play than what you’re accustomed to."

Former General Manager Ron Hextall also had encouraging words about Kase back in March of 2016.

"He plays and competes. He’s just a dog out there, he hounds the puck," Hextall said. "The skill level is there. He is a smart player. He stays on the right side of the puck. For where we got him in the draft and his upside, we’re very happy. He’s a great kid and he just loves to play the game."

Kase showed flashes earlier this year but due to an upper-body injury and suspected concussion that has kept him out from Dec. 7 to March 2. The lengthy absence really set him back development wise.

Kase is a small yet shifty and rather creative player. It is going to take some time before Kase gets back to the point where he and the Flyers organization prefer to be.

Kase could be a valuable asset to the Orange and Black in the near future, and with the way that their roster is looking, he has bottom nine-top six potential. Before his injury, Kase was demonstrating his remarkable speed.

Although small, the 5'9" 170-pound right winger is fast and has a great hockey IQ. He has plenty of speed and can shoot the puck with unbelievable accuracy and his brother Ondrej most likely helped him out in that area, as he was a huge inspiration.

He is already an underrated player in the Flyers pool of prospects and with his wheels, hockey IQ, and incredible hands, the sky is the limit for him. Believe it or not he actually got faster coming into this season, even after he put on about five pounds.

"Just a real high-energy player," Gordon said. "Has great skill. Competes hard. He’s one of those guys where if you didn’t know anybody on either team is, his energy would show up and he’d be the first guy you’d look at the roster and want to know what his name is. Right away you can see the energy he plays with."