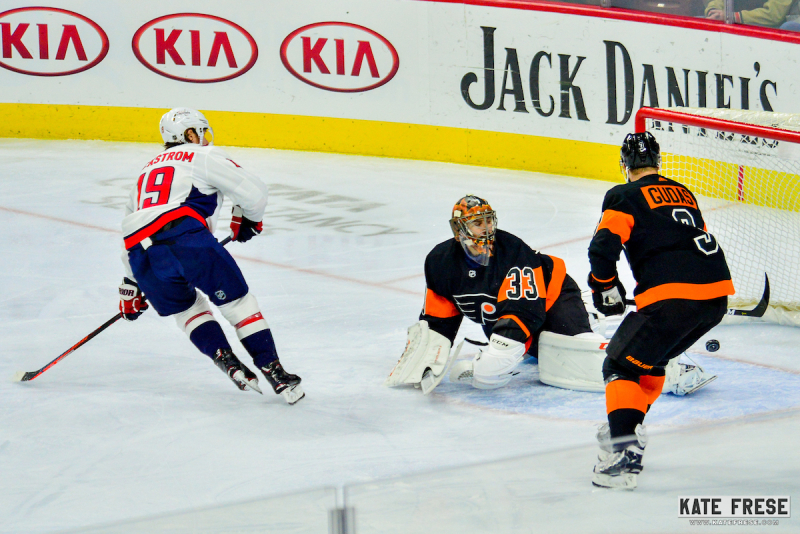 The Flyers managed without two of their top six forwards on Sunday in an impressive win over the Islanders. Without the same two forwards on Wednesday, they looked completely outmatched against the defending Stanley Cup champions.

The Capitals scored twice in the first period and added three quick goals in the second to put the game away early and held off the Flyers comeback in a 5-3 win on Wednesday night at Wells Fargo Center.

Washington got on the board first at 5:55 with a goal by Tom Wilson off a setup from Alex Ovechkin from his knees.

Later in the period, Brett Connolly cut in and appeared to hit the crossbar. However, the play was reviewed during a TV timeout after the next stoppage and it was determined the shot hit the in-goal camera and came out, resulting in a goal for Connolly to make it 2-0.

After 20 minutes, the Capitals had a 15-7 shots advantage.

The Capitals put the game away with three goals on their first five shots of the second period. First, on a power play, it was Ovechkin getting the goal with a shot through the five hole of Brian Elliott.

Less than two minutes later, Andre Burakovsky came up the wing and beat Elliott to the short side. He was pulled after that, allowing four goals on 19 shots.

On the first shot backup Cam Talbot faced, the Capitals got another goal. Jakub Vrana won a race to a loose puck, took it behind the net and centered to an open Nicklas Backstrom, who beat Talbot to make it 5-0.

With 11.3 seconds left in the period, the Flyers broke the shutout bid for Braden Holtby with a first. Claude Giroux set up Phil Myers for his first NHL goal, a nice wrist shot from the slot.

Shots through two periods were 25-16 Capitals.

Just 10 seconds into the period, Giroux scored on a feed from Oskar Lindblom to cut the lead to three.

The Flyers had to kill off a penalty shortly after and barely did with the help of a save from Ivan Provorov.

With 12:12 remaining, the Flyers cut the lead to two as Andrew MacDonald's point shot was tipped by Scott Laughton and beat Holtby.

The comeback bid ended there. While the Flyers had some good energy for the rest of the period, they could not solve Holtby for the remainder of the game, falling short.

Giroux and Sean Couturier finished with two points each in the game. Ovechkin, Backstrom and Dmitry Orlov each had two points for Washington.

The Flyers get back on the ice on the road to face the New York Islanders on Saturday night. Game time is at 7 p.m.