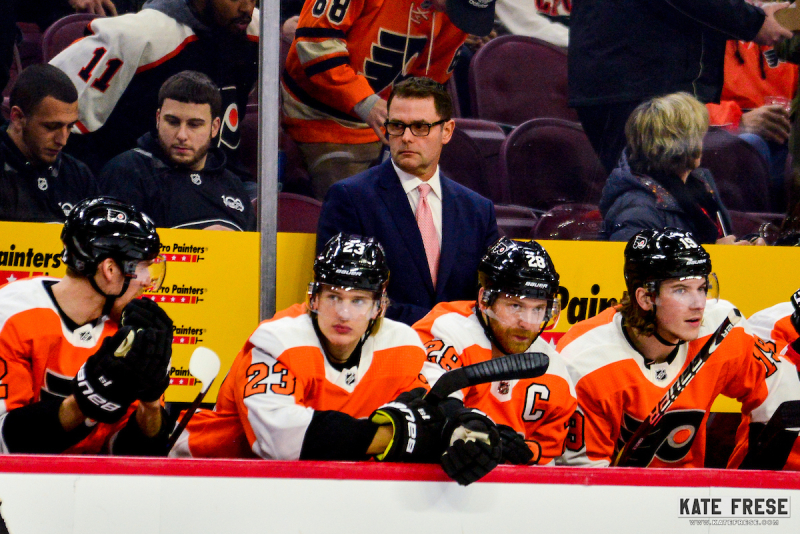 What has happened leading up to this point has been a roller coaster of emotions.

As it stands entering Tuesday’s NHL action, the Flyers are five points out of a playoff spot with 16 games to go. It is still not an easy task to get there. But it is believable, especially after cutting the margin down from 16 points on Jan. 15.

If the Flyers are able to make it up, it would be a historical comeback to reach the postseason. If they don’t, well, this run is still remarkable nonetheless.

To get a better understanding of what makes the Flyers run so remarkable, you need to relive all sides of the season.

The Flyers had 12 games in October. They were on the verge of giving up a potential point in Anaheim in their last game of the month when Nolan Patrick scored in the final two minutes to swipe a regulation victory away. October ended and the Flyers had a 5-7-0 record and 10 points in the standings. That was only tied for 12th in the Eastern Conference, but also just four points out of the playoffs.

The win in Anaheim was the first of five straight games with a point, including four wins. Following a victory over Chicago on Nov. 10, the Flyers were in second place in the Metropolitan Division with 19 points through 17 games.

Two weeks later, the Flyers had played six more games. Their only win was a 4-0 showing against the Rangers on Black Friday. Among the others were a 5-2 drubbing to the Buffalo Sabres and a 6-0 shellacking to the Toronto Maple Leafs. After that six-game stretch, the Flyers were five points out of a playoff spot, tied for 13th in the Eastern Conference and had a 10-11-2 record.

That was Nov. 26, the day that Ron Hextall was fired as GM.

From that day, the Flyers played eight more games. They posted a 2-4-2 record, dropping to 11 points out of a playoff spot, last place in the Eastern Conference standings at just 28 points with a 12-15-4 record.

That was on Dec. 17, the day Dave Hakstol was fired as head coach.

The Flyers started with a 3-1-0 record under interim head coach Scott Gordon, but then went on an eight-game losing streak that brought their record to 15-22-6 through 43 games. They had just 36 points in the standings, dead last in the East still. It was becoming fair to write off the season altogether, especially with all of the changes and the continued lack of success.

That’s where this remarkable run begins for the Flyers. They put together eight straight wins in the middle of a 13-2-1 stretch over the next 16 games. By Feb. 18, they had climbed from last in the East to tied for 11th, cutting the gap to a playoff spot from 16 at one time to six.

The Flyers lost their next two games, which threatened to derail the efforts of a comeback, but won dramatically in the Stadium Series and picked up another win in their first game after the trade deadline to improve to 30-26-7 after 63 games, seven points out of a playoff spot.

Three games on the road followed with the Flyers going 2-0-1 and earning five of a possible six points to close the margin to five points.

That leaves the Flyers with 16 games left to make up the remaining five points. It is still a challenge with teams like Pittsburgh, Columbus, Carolina and Montreal all standing in the way, though the Flyers just need to vault two of the four to make the playoffs.

It may be difficult, but don’t discount what the Flyers have done over the last couple of months. After about as poor a first half of the season as a team can have, with all the changes thrown in as well, the team has put together a second half that is nothing short of spectacular.

It hasn’t even always been pretty. The Flyers have had to will their way to victory on many nights, through injuries, through mistakes, through adversity, through trades. They have passed every test.

Whether the Flyers make the playoffs or not is irrelevant at this point. Knowing the task was next to impossible, just being in the conversation is an accomplishment. The fact that the Flyers are here, playing meaningful hockey into March, is remarkable enough.