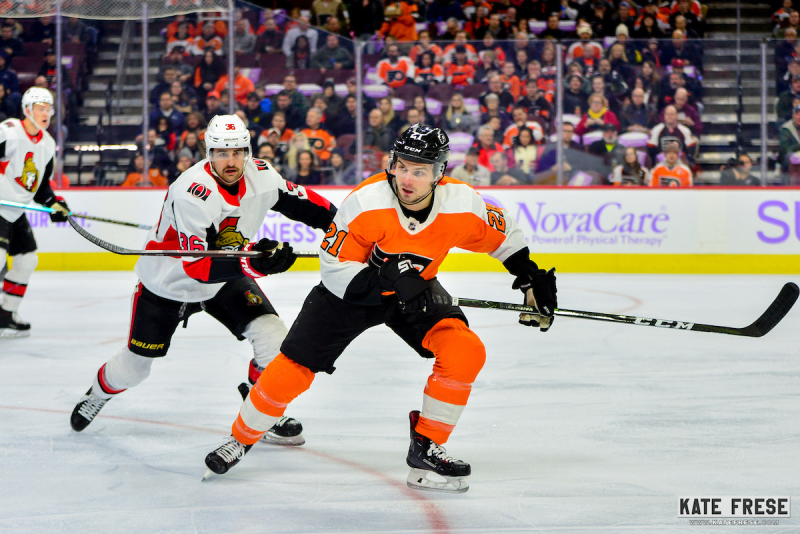 The Flyers enter Monday's game coming off another convincing win on Long Island. Despite the 5-2 final, the Flyers did suffer a loss from that game.

Jake Voracek will be out on Monday and again on Thursday serving a two-game suspension issued on Sunday for interference on Johnny Boychuk.

Monday, the Flyers will face the Ottawa Senators, the team at the bottom of the NHL standings and a team that looks a lot different following the trade deadline two weeks ago. It is one of the rare games left on the Flyers schedule against a team outside the playoff picture.

Since scoring seven goals in a 14-game span, Oskar Lindblom has been held off the board for five straight games. Lindblom has remained a strong forward on the forecheck and driving play, but the points haven't been there lately. This could be an opportunity for him to get back on the scoresheet too.
It's been a difficult season for Ottawa, but Brady Tkachuk has been a bright spot. The rookie has 16 goals this season, including four against the Flyers.

Brian Elliott gets another start on Monday night against Ottawa after making 25 saves in Saturday's win over the Islanders. Elliott has won four of his six starts since returning from injury.

Craig Anderson has lost four straight starts, allowing three goals or more in each. He most recently allowed three goals on 31 shots in a 3-2 loss late in regulation to the Bruins.

With Jake Voracek serving his suspension, the Flyers do not have an extra forward, so they will go with the 11-forward, seven-defensemen lineup on Monday night. Andrew MacDonald comes back into the lineup. Carter Hart will serve as backup to Brian Elliott tonight.