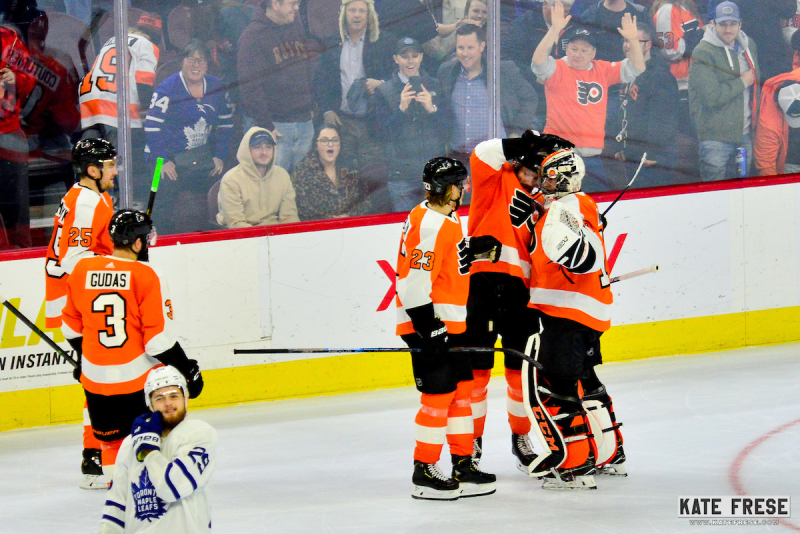 After a wild overtime where the Flyers appeared to have won the game only to have another quick whistle take it away, Carter Hart was experiencing another first: his first shootout at the NHL level. And he had a lineup of All-Stars coming at him.

Hart never wavered, making four saves in the shootout, including on attempts by Mitch Marner, Auston Matthews and William Nylander, as the Flyers got the only goal of the skills competition from Sean Couturier to seal a 5-4 win over the Maple Leafs on Wednesday night at Wells Fargo Center.

Toronto jumped on two chances in the opening period. With both teams' fourth lines on the ice, Tyler Ennis played keep-away with Corban Knight while Connor Brown escaped and was open on the backdoor. Ennis fed him with a backhand pass and Brown scored to make it 1-0 Toronto at 5:03.

Seven minutes later, Toronto took advantage of a Flyers turnover as Brown set up Nazem Kadri from the side of the net for his 16th goal of the season.

The Flyers played a much better second period, dominating in possession. Just 3:39 into the period, the Flyers got on the board as Travis Konecny scored from the wing off the rush for his 23rd goal of the season to cut the lead to one.

At 8:15, a point shot by Radko Gudas sailed past Frederik Andersen to tie the game at two.

With 4:14 remaining in the period, Couturier tipped in a point shot-pass from Travis Sanheim to give the Flyers their first lead of the game. It was Couturier's 32nd goal of the season, giving him a new career high.

It didn't take Toronto long to erase the deficit early in the third. Matthews had his initial shot stopped by Hart, but lifted the rebound to the top corner to tie the game at three.

The Flyers regained the lead at the nine-minute mark. A nice pass by Scott Laughton set up Ryan Hartman from the slot for the go-ahead goal, just his second since joining the Flyers.

The lead was short-lived though, as less than three minutes later, the Maple Leafs took advantage of another turnover. A failed clear by Shayne Gostisbehere was collected by Nylander and Matthews and Nylander finished it off, lifting a high shot over Hart to tie the game at four.

The Flyers killed off a penalty in the final two minutes to force overtime. By getting the game beyond regulation, the Flyers were not mathematically eliminated from playoff contention.

In the overtime, the Flyers appeared to score when Sanheim pushed a rebound past Andersen, but the officials waved off the goal for intent to blow the whistle. The overtime featured quality chances for both sides, but no scoring, so the game went to a shootout.

The shootout went beyond the three rounds with no goals being scored. In the fourth round, John Tavares had a chance to win it for Toronto, but lost control of the puck just past the blue line and never got an attempt on goal. In the fifth round, Couturier used a nice move to beat Andersen and score. At the other end, Hart made his fourth save of the shootout on Nylander to end the game.

Three Flyers had multi-point nights. Sanheim, Laughton and Knight each finished with two assists in the win. For Toronto, Brown and Matthews each had a goal and an assist.

The Flyers are off from game action until Saturday when they travel to face the Carolina Hurricanes. Game time is at 1:30 p.m.