Eagles Flyers Phillies Sixers About Us Write For Us
Previous month:
February 2019
Next month:
April 2019

Kapler Displeased with Braves for Throwing at Phillies' Hoskins 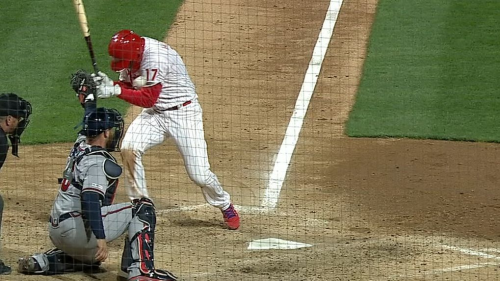 Philadelphia Phillies Manager Gabe Kapler is extremely unhappy with the Atlanta Braves, which with no context would be odd, considering the club is off to an impressive 3-0 start to the 2019 season.

Leading 4-1 in the bottom of the seventh, right after Bryce Harper launched his second home run, Phillies first baseman Rhys Hoskins was hit by a pitch near the head by Braves pitcher Shane Carle. Without hesitation, home plate umpire Rob Drake ejected Carle.

Hoskins had been thrown at multiple times prior in the series, and Kapler simply had enough, as evidenced in the message he relayed to reporters following the win.

"“It really pisses me off when balls go underneath Rhys Hoskins' chin. It really bugs me," Kapler said. "He's one of our leaders. He is, in many ways, the heartbeat of our club, and it really bothers me when that happens."

The ejection was the Braves' first of the season, and the third overall for MLB. 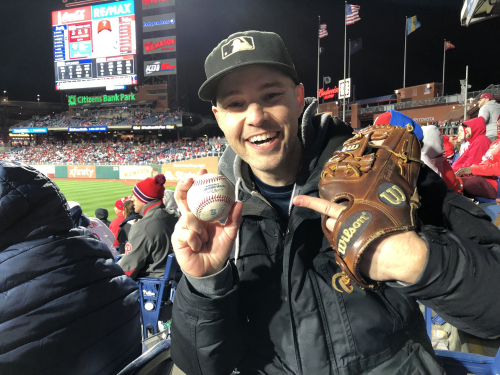 No, he is not a player, coach or front office executive, only a fan. A very lucky fan.

As described on his website, Hample has attended games at 54 different MLB stadiums. While impressive, he has another claim to fame: snagging "more than 10,000 balls in the stands," including Mike Trout's first career home run and Alex Rodriguez's 3,000th career hit.

Now, Hample can add snagging Bryce Harper's second career home run in a Phillies uniform to his impressive resume. Harper launched the home run in the seventh inning of the club's series finale against the Atlanta Braves Sunday evening.

Hample tweeted, "BRYCE HARPER, BABY!!! Here I am with his 2nd home run as a member of the Phillies. Unreal. (This is my 67th lifetime game homer, FYI. Hoping to hit triple digits someday.) #RingTheBell #MLB."

Fans can attend hundreds of games in their lifetime and not catch a home run. Hample now has caught 67, and does not appear to be finished any time soon. The Phillies won the game, 5-1, sweeping the season-opening series against a division opponent for the first time since 2001. 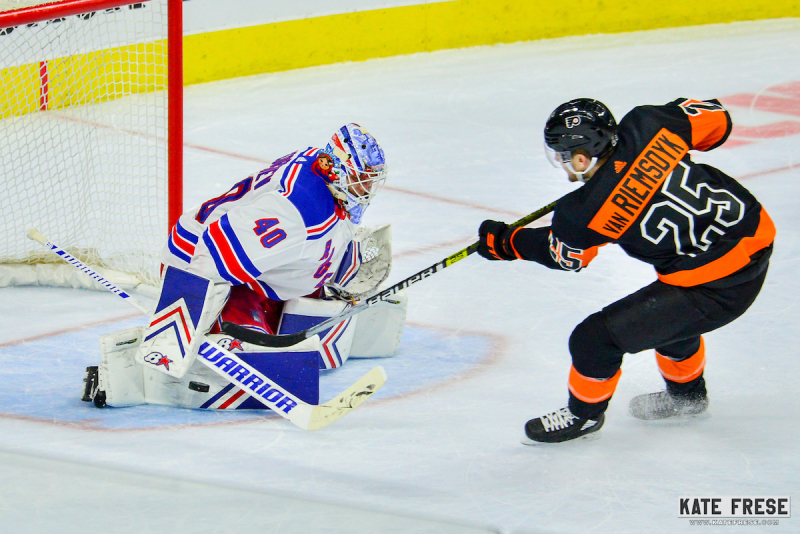 The Flyers playoff hopes officially ended on Saturday afternoon, making Sunday's game at home against the Rangers a match between two teams whose seasons will end on in another week.

The Rangers have been in that spot for a while now, and handled the Flyers easily on Sunday. Alexandar Georgiev came through with 29 saves in a shutout win as the Flyers fell to the Rangers, 3-0, at Wells Fargo Center.

After going against rookie RHP Bryse Wilson on Saturday before a sellout crowd of 44,597 , the Phillies will face another Braves rookie in Sunday's series finale — RHP Kyle Wright. According to The Athletic's David O'Brien, this is the first time since 1905 that the Braves have tabbed multiple rookie starting pitchers within the first three games of a season.

ELIAS: Down the stretch in '18––from August 12 to the end of the season––the Phillies faced a rookie starter 7 times and they went 1–6 in those games. They are off to a good start in that department this year, after yesterday’s victory in which ATL started Bryse Wilson.

Atlanta's 8-6 loss to the Phillies on Saturday secured their first season-opening series loss to the Phillies since 1948, snapping their 10-series streak. The Phillies were down 3-0 early with RHP Nick Pivetta on the mound, when J.T. Realmuto picked up his first hit with the Phillies, a RBI single in the second. Two innings later, Cesar Hernandez hit a RBI triple, followed by Maikel Franco going yard for the second straight game. Realmuto hit a 434-foot blast to center in the fifth, his first in red pinstripes.

.@Phillies fans have to like what they see from the team's two biggest acquisitions of the offseason in @JTRealmuto and @bryceharper3 pic.twitter.com/y8l0W1duV7

PHILADELPHIA, Pa. — The Philadelphia Phillies (2-0) came into this afternoon's game against the Atlanta Braves (0-2) still riding the high of their Opening Day victory. They built upon that momentum in today's roller-coaster win that was full of firsts. Not only did it secure the first series victory of the Phillies' 2019 season, but two of the team's most highly touted off-season acquisitions, Bryce Harper and J.T. Realmuto, both hit their first homers in a Phillies uniform. Harper's home-run was especially rewarding, considering the mounting anticipation since he signed his record-setting contract to roam right field for the next thirteen seasons. The blast went far beyond the wall in right-center field, landing in the second deck 465 feet away from home plate. The crowd gave a rousing ovation and practically demanded a curtain call, which Harper was more than happy to give.

Phillies starter Nick Pivetta was underwhelming in his first start of the season. The righty allowed four runs on eight hits over four and 2/3 innings. Outside of David Robertson, who struggled in the ninth inning, the relief pitchers were fantastic. Adam Morgan, Juan Nicasio, José Álvarez, Pat Neshek and Seranthony Dominguez did not allow any hits and combined for only two walks. Robertson's difficulties are a bit concerning, considering that he also allowed a run during his appearance on Opening Day.

The offense exploded in support of the pitching staff. In addition to Harper and Realmuto, Maikel Franco also hit a home-run. The third baseman now has two homers in as many games and appears comfortable hitting eighth in the line-up. The team has totaled six home-runs in its first two games, which is a first for the Phillies franchise. Both Realmuto and Franco totaled three RBI on the day. César Hernández got two hits, including a triple in the fourth inning, and scored two runs. It's encouraging to see contributions up and down the batting order. The team will need to continue this pattern through the season if they want to be successful.

The Flyers playoff push is officially over after a 5-2 loss to the Carolina Hurricanes on Saturday afternoon.

For the first time since 2011, the Philadelphia Phillies (1-0) will look to win their season-opening series, as RHP Nick Pivetta opposes the Atlanta Braves (0-1) and rookie RHP Bryse Wilson Saturday evening at Citizens Bank Park. The Braves, meanwhile, will look to avoid their first season-opening series loss to the Phillies since 1948, FOX Sports South's Cory McCartney notes. The Phillies have announced that, like Opening Day, the game is sold out.

Many fans have "high hopes" for Pivetta in 2019, and are using the #BreakoutPivetta hashtag to express such belief. The right-hander was acquired as a prospect from the Washington Nationals in July 2015, for closer Jonathan Papelbon nonetheless, and has worked his way up to become a top-three starter on the Phillies' pitching staff. He reached as high as 99 miles per hour on the radar gun this spring, ranked about the league's best in FIP, and has a strong strikeout-inducing breaking ball pitch in his pitching repertoire.

After “kicking butt” in the Opener Bryce Harper and the Phillies “can’t wait” for today vs Braves @6abc#bryceharper#RingTheBell pic.twitter.com/NmjTCK7qpP

As the saying goes, "if it is not broke, do not fix it." Manager Gabe Kapler is following that mantra in the second of the three-game set, as the Phillies will feature their exact lineup from their 10-4 Opening Day victory, one through eight. Left fielder Andrew McCutchen will lead off — after hitting a solo home run to get things going early against veteran RHP Julio Teheran. Rhys Hoskins — fresh off his first-career grand slam — will bat cleanup again behind Bryce Harper, who looks to collect his first hit in red pinstripes.

Saturday marks the Phillies' second of 21 games in their season-opening 28-game stretch that they face a National League East opponent. The Philles will take on the Washington Nationals on Tuesday in a brief two-game road set down in the nation's capital. They will later opposite the Miami Marlins and New York Mets for the first time in 2019 away April 12-14 and home on April 15-17, respectively.

Five games are left for the Flyers and for now, they are still mathematically alive in the playoff race, though a regulation loss will officially end their hopes, so it really is inevitable at this point.

So begins audition time for many Flyers as they begin the final five on the road facing the Carolina Hurricanes on Saturday afternoon.

'Pinnacle Phillies' Are Back: Excitement Felt on Opening Day Was Like No Other 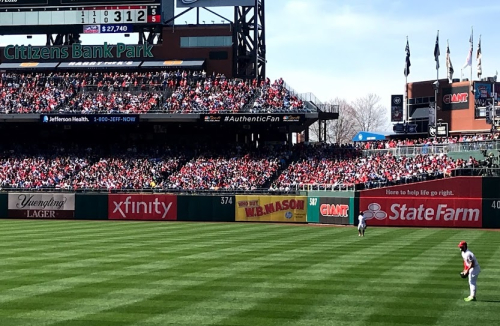 There's something pretty special about Citizens Bank Park being full again, with fans tuned in to every pitch and every at-bat, as was the case during the Philadelphia Phillies' 10-4 Opening Day victory over the Atlanta Braves on Thursday.

The Phillies, like their Sports Complex basketball neighbors, endured a "process" of their own — from shuffling through managers (e.g., Ryne Sandberg and Pete Mackanin), to fielding once-All-Star-caliber veterans on the tail-ends of their careers, with the hope of somehow — but ultimately not coming anywhere close — of sneaking into Red October (e.g., Juan Pierre, Michael Young, Jim Thome, and Jonathan Papelbon).

The Phillies' "process" under former leadership just was not working. And entered Andy MacPhail and Matt Klentak near the end of the 2015 season; less than four years later, the Phillies no longer need to worry about looking up in the standings, only who's under them.

There was a buzz felt at Opening Day on Thursday that had not been felt since the 2011 National League Division Series, Game 5 — the infamous 1-0 defeat against the St. Louis Cardinals when franchise great Ryan Howard tore his left Achilles tendon on the last play of the game and season, and what would turn out to be a huge blow for the rest of his career.

From the very moment you approached the stadium on Thursday, the sea of red brought back memories from that 102-win season in 2011, but also encouraged new memories to be made, now with Bryce Harper, J.T. Realmuto, Andrew McCutchen, Jean Segura, Rhys Hoskins, and more. Everything was amplified to uncharted levels; the "Leadoff Walk" began near the The Yard at the former right field gate, allowing more fans to catch a close glimpse at the new-look team than ever before as they proceeded through Ashburn Alley and onto the field. Kane Kalas' singing of the National Anthem endured more tears than in recent seasons past, too. Man, Harry would have loved this team.

Even the Frog-X Parachute Team landing on the field with the first balls were more thrilling. Frog-X did not do anything different from previous Opening Days, but it just felt better. McCutchen's leadoff home run allowed this build-up of excitement to carry through the game, leading up to Hoskins' first career grand slam to top it all off.

The excitement of Phillies baseball, the way we loved it during its pinnacle point during the 2007-11 run, is back. Every player in the lineup is capable of during great things, just like Howard, Chase Utley, Jayson Werth, Pat Burrell and others did.

Remember when Howard first came up in the majors, and the stadium silenced, knowing the slugger was capable of sending the baseball into the stands — any time, any situation? That was just the case on Thursday for Harper, but, again, at a level never felt before inside Citizens Bank Park.

Whether you want to "Trust the Process," "Bleed Green," cheer on the Orange and Black, or "Ring the Bell," it's great to be a Philadelphia sports fan — and even more so a Phillies fan — in 2019, and for many years to come.

Eagles Find Their Power Back in Jordan Howard

On Thursday night, the Eagles completed a trade for Chicago Bears running back Jordan Howard.

Roster Move: #Eagles have acquired RB Jordan Howard from the Chicago Bears in exchange for a 2020 draft pick.#FlyEaglesFly pic.twitter.com/xFJd0WPEOy

Continue reading "Eagles Find Their Power Back in Jordan Howard" »